News from a Cold Sauna: How the COVID-19 Pandemic Revealed Considerable Differences in Newsrooms’ Digital Preparedness

Interviews with 30 Finnish media workers show how some newsrooms were ready to take on remote work as the global pandemic hit Finland – and others were already falling from the digital bandwagon, write Tiina Saari, Minna Koivula and Mia Tammelin.

When the COVID-19 pandemic hit Finland in March 2020, many Finnish journalists were forced to leave their newsrooms and instead work from their kitchens, living rooms, or even saunas. The fast switch to remote work came as a surprise to many and measured newsrooms’ ability to react to rapid changes in working conditions.

As part of the Media Work 2030 research project, we interviewed 30 Finnish journalists last spring. We were not aiming to collect data about remote work specifically, but the effects of the quickly escalating pandemic can be easily seen in our interviewees’ narratives about work. Indeed, all our interviewees were working from somewhere else than their company’s office during the spring and summer months.

As the interviews progressed, it quickly became clear that newsrooms’ practices regarding remote work varied greatly. Some interviewees reported having had bans on remote work before the pandemic whereas others, mainly journalists covering specific regions for outlets, told us that they worked remotely most of the time even before March. The only difference for these journalists was the ban on visiting the newsroom even from time to time.

For many first-time remote workers, the jump from the office to home required some adjusting. One of our interviewees explained to us that he always takes care of work calls from his sauna so that home life would not interfere with work.

Many interviewees also reported that communication with their colleagues had changed drastically. Meetings, quick shout outs for help, or updates on personal news had to be handled through technology. Some newsrooms had already made use of instant messaging and enterprise social media before the pandemic while others had to introduce these technologies into their workflows as fast as possible as the pandemic evolved. Thus, the overall picture of newsrooms’ digital preparedness in the face of COVID-19 is not uniform. Rather, newsrooms’ ability to keep producing journalism despite the pandemic varied immensely.

All in all, however, the journalists told us that the transition to remote work went surprisingly smoothly. Technology was reported to enable almost office-like working conditions, and IT problems were only rarely the biggest challenge of working from home. Rather, the lack of a peaceful workspace and difficulties in concentration were seen to hamper work more.

Some of our interviewees experienced working from home as lonely labor and felt separated from their community at work. As the spring progressed, journalists became increasingly fed up with staring their screens alone at home. Many dreamed of returning to the newsroom and the company of their colleagues. 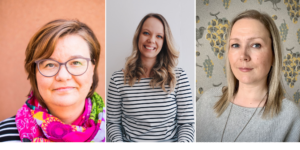 In many media organizations, remote work has been previously banned or at least considered suspicious due to deep-seated practices, prejudices towards new digital technologies as well as fears of work not getting done at home.

After a spring and summer spent in unprecedented conditions, we hope that newsrooms will have more room for various ways and forms of working in the future. More often than not, news may be delivered to us from a journalist’s living room – or perhaps from a cold sauna.

The writers have contributed to the report “Mediatyöntekijöiden kokemuksia työstä digitaalisessa toimintaympäristössä” [Media professionals’ experiences of work in digital environments]. The report can be found at http://mediawork.fi/news/ . The report is part of the Media Work 2030 project which is carried out by the Department of Language and Communication Studies and the Department of Psychology, University of Jyväskylä in collaboration with the Work Research Centre, University of Tampere.

“Instagram, my dear friend” – Brand relationships in the digital age are formed with brands from ketchup to streaming services