Your memory updates itself during sleep

The brain works independently for the good of its owner. It assists you by assessing what is worth remembering and what is not. Memory stores what you experience and learn, but many things are also removed from it.

Nothing is learned at once. “When you buy a new car, it takes at least two weeks before nerve paths modify to remember the subtleties of the car’s technology and forget unnecessary things,” says Docent Markku Penttonen.

In a way, feelings work as the brain’s assistants, helping you to remember things. “You can remember everyday events more easily than, for example, news in the newspaper,” Penttonen explains.”The incidents connect to emotions while the news texts do not cause similar reactions.”

During a research period in the USA, Penttonen started to incline more to the research of learning with the help of rodent behaviour. “The structure of the nerve cells is pretty similar for rodents and humans; the basic functions have remained relatively same during the development of the species,” he explains.

In cooperation with Docent Miriam Nokia, Penttonen leads the Academy of Finland’s Dentate gyrus – muistin portti? project, which is related to the JYU’s brain profiling area and continues to September 2022. The research group is interested in how storing things in memory is regulated. 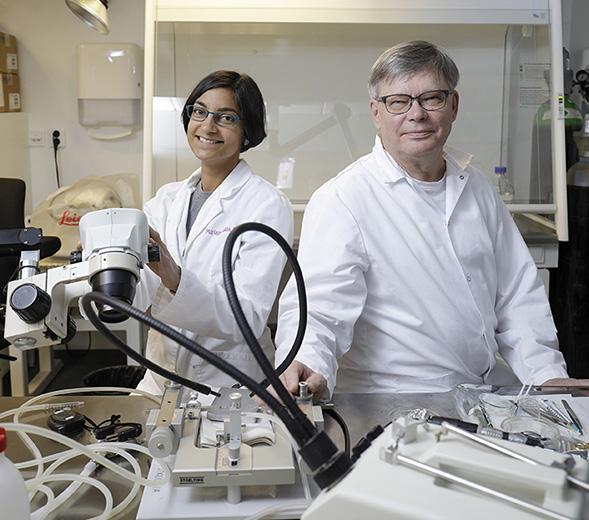 Miriam Nokia and Markku Penttonen in the research laboratory.

Animal research is an established part of experimental neuroscience. A research group from the Department of Psychology at JYU monitors how animals change their behaviour and what happens when the change is stored in the brain system. “We have the best possible equipment for studying the brain activity based on the behaviour of rodents,” Penttonen says.

The knowledge of various research models for both animals and humans is a strength of the Department of Psychology at JYU. “Memory is limited. Even when its functioning is improved, it is not possible to increase the number of remembered units endlessly,” Penttonen says.

Researchers already know how things get stored in the memory. During the day, short-term memory collects a bunch of input that nerve cells then store in the cerebral cortex during sleep. The nerve cells reactivate repeatedly during sleep, repeating daytime activation patterns more or less reliably. Then individual nerve cells, which are activated in events related to each other, connect and create networks.

“When the networks get synchronized, information is transferred from the hippocampus to the cerebral cortex where the events happened during the day stay more permanently. By studying animals and people, it has been observed that if sleep is fragmented, memory storage is not efficient,” says Nokia.

Now researchers are interested in how the nerve connections of the cerebral cortex have enough plasticity so that it is possible to learn something new. The hypothesis is that the dentate spike, a short cell activation in the dentate gyrus, the entry area of the hippocampus, removes unnecessary memories and sharpens new ones. Researchers also study if this mechanism requires new nerve cells to be formed in the hippocampus through one’s whole life.

Normal life is the best for the brain

“What about if we were able to develop a method to remember everything – would that be sensible?” he asks. “Since memory is limited, how do we know what is worth remembering?”

Penttonen strictly refuses to give guidelines in life. “A brain researcher cannot give clickbait advice. Memory stays functional with a normal lifestyle,” he says. “A researcher’s opinions are not more valuable than the views of any other person who has experienced life.”

With a wire made of plastic straws, the members of the research group, Xu Weiyong (on the left), Arto Lipponen, Joonas Sahramäki, Markku Penttonen and Miriam Nokia, demonstrate dentate spike. It is a large change in electrical potential produced by the simultaneous activation of a large number of neurons in the dentate gyrus of the hippocampus.