Top sprinter Joni Mäki already knows what the Olympic uphill stages in Beijing  feel like. Joni Mäki is skiing the 3.3 km trail of the upcoming Winter Olympics. Physically, this training session is taking place in the Vuokatti Skiing Laboratory of the University of Jyväskylä, but in his thoughts Joni is already present at the site of the Olympic event.

Joni Mäki must soon exert his best effort as the hardest uphill climb of the sprint trail is approaching. The broad skiing treadmill rises to the correct slope, while Joni keeps his gaze firmly on the virtual skiing trail projected on the wall.

After four rounds, he already knows how the uphill climbs will feel in Beijing.

“We are figuring out the stages where I have to work harder and I am learning the layout automatically by heart”, Joni Mäki says.

The downhill parts Joni still needs to imagine, however. In a downward slope, he grasps the rail that surrounds the treadmill and slides down fast on his roller skis along with the rolling treadmill. The real character of the downhill sections will be found out only on site in February 2022.

As he curves into the home stretch, Joni’s speed reaches 30 km/h, a virtual crowd of spectators are following him at the goal line and his coach Juho Halonen is instantly praising him for the performance.

“How hard was it at the end?” Halonen asks. 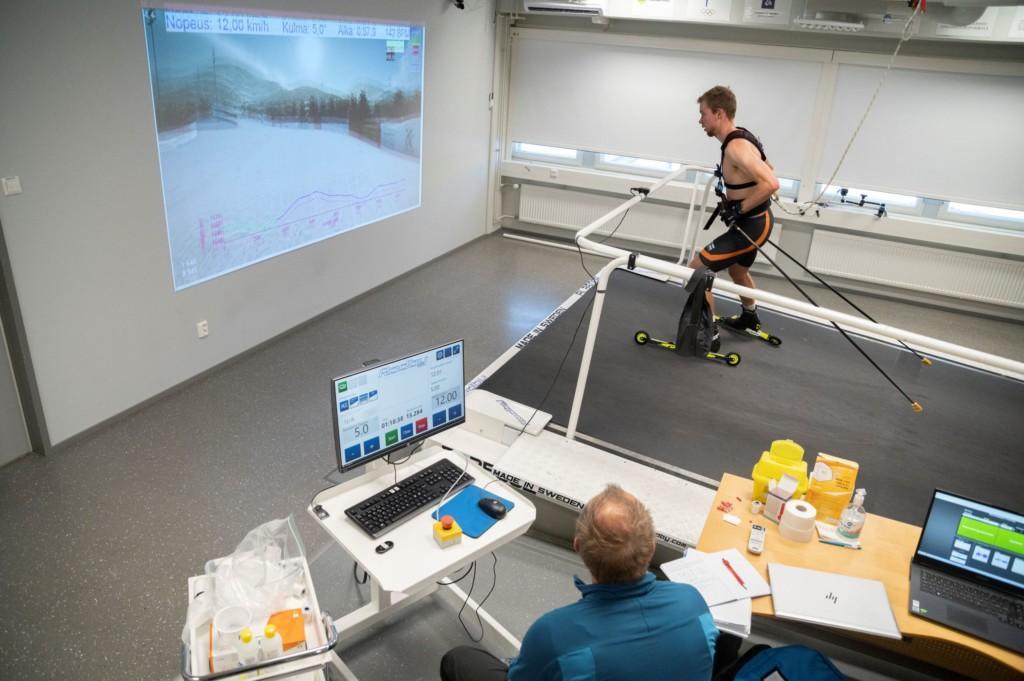 During the training session Mäki’s coach Juho Halonen was doing his own job at three computers.

While Mäki was skiing on the treadmill, Halonen was doing his own job at three computers. One of the computers displayed the virtual ski track animation from the Beijing area mountains to Mäki. Halonen used another computer for adjusting the ski treadmill speed to correspond to the objective of the training session. The third computer he used for video recording:

“We record video clips during the performance on some particular stages that we wish to analyse more specifically afterwards”, Halonen explains. “There is so much going on during the test performance that everything cannot be analysed there and then.”

Research knowledge to support top sport is disseminated in the field 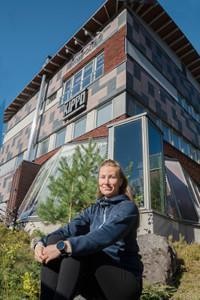 Project Manager Anni Hakkarainen is working at the Sports Technology Unit in Snowpolis in Vuokatti.

The Sport Technology Unit is located next to Vuokatti Sport Institute. The unit provides master’s and doctoral level education, and disseminates research knowledge actively to the field of top sport: the unit develops methods by which an athlete’s performance or technique can be measured better than before.

In addition to the skiing laboratory, studies are conducted outdoors in the local terrain as well as in the skiing tunnel and the ski testing laboratory. The unit is led by Professor Vesa Linnamo.

Virtual skiing tracks are also part of the Älylatu (Smart Track) project that started this autumn. The project aims at developing an editing tool by which virtual routes could be constructed more easily. The partners of the Sport Technology Unit in this project include Kajaani University of Applied Sciences and CSC – IT Center for Science Ltd and Ltd C.E. Lindgren AB and Vuokatti Sport.

“In addition to the virtual settings pertaining to top sport events, we are also developing pose estimation method, for example, which can facilitate the development of automatic movement analysis. We also contribute to the validation of new prototypes of force sensors integrated to skiing equipment as well as to the study of skiing by means of a novel innovation of an artificial skiing trail,” says Project Manager Anni Hakkarainen from the Vuokatti Sports Technology Unit.

The virtual skiing event environment constructed in Vuokatti originates from Olli Ohtonen’s and Project Researcher Teemu Lemmettylä’s visit to the Olympic sites in Beijing in October 2018. There was no snow when they were exploring and video recording the unfinished skiing track layouts. 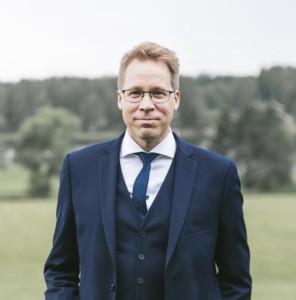 No laser-scanned typographic data were available from Beijing.

“Later, we received some video material, the skiing track profiles and basic maps from the organisers”, Ohtonen says about the initial data for the virtual skiing tracks.

Doctor Olli Ohtonen is an efficient link between JYU research and top Finnish athletes. He is working as a postdoctoral researcher at the University of Jyväskylä and also as the R&D Director of the National Olympic Training Center Vuokatti-Ruka. He has a close contact with the daily lives of athletes, as he is the personal coach of Iivo Niskanen and Turo Sipilä.

Because of the coronavirus restrictions, the Vuokatti-based virtual skiing track team has not been able to visit the sites in Beijing again. The virtual advance touch has been extremely important for the athletes, as no preliminaries could be arranged in Beijing.

Is there any simulator similar to the one in Vuokatti in use anywhere else?

“I believe that the Swedes and Norwegians have simulation environments of their own kind”, Ohtonen says.

Should there also be simulated fellow competitors on the virtual tracks? 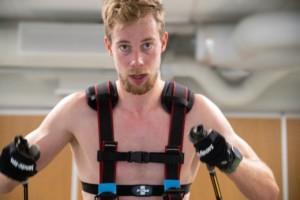 Training season has gone well, said Joni Mäki at the beginning of September in Vuokatti.

Joni Mäki will have the next opportunity to test his condition on the virtual track in Vuokatti at the end of September. His thoughts are already strongly set on the sprint event in Beijing, and the simulated skiing track serves as an apt reminder.

“This Olympic sprint event is for me a once-in-a-lifetime opportunity. My focus is there”, says 26-year-old Joni Mäki, silver medallist together with Risto-Matti Hakola from team sprint in the World Championships in Oberstdorf in February 2021.

The Finnish Olympic Committee selects athletes for the Winter Olympics until January 2022.

Research and development work on the virtual tracks in Vuokatti will continue. In the future, the athlete should also have easy access to the controls, for example to adjust the speed of the treadmill during the training session, says Ohtonen.

How about having virtual competitors on the track?

“Why not?” Ohtonen says. “There could be virtual competitors adjusted to a desired speed.”

More information about Sport Technology education and research at the University of Jyväskylä: https://www.jyu.fi/sport/fi/liikuntateknologia