Sport and physical activity research has long traditions, but studies related to performance capacity and physiology have typically concerned males only. Females have often been excluded from such research due to, for example, the hormonal changes involved in the menstrual cycle. “It should not be like this,” says Postdoctoral Researcher Johanna Ihalainen from the Faculty of Sport and Health Sciences, University of Jyväskylä.

“Research focusing on female athletes is admittedly a bit more laborious, because one needs to take the menstrual cycle into account,” Ihalainen says. “However, in my opinion, it has been made too difficult.”

Ihalainen has been involved in a Norwegian study where the country’s top athletes in skiing and the biathlon were asked about the effects of the menstrual cycle and hormonal contraception on sports. This study highlighted the need for more knowledge among athletes as well as coaches.

Ihalainen decided to develop and extend the Norwegian survey, and a revised survey, which was constructed together with a large research team, was published in spring 2020.

“The amount of controlled research dealing with athletes’ menstrual cycle and hormonal contraception is scarce,” Ihalainen explains. “For this reason, we wanted to investigate athletes’ own experiences of performance capacity and health so that we could better describe the daily life of female athletes.”

In addition to questions related to their menstrual cycle, athletes were asked about their nutrition and body image.

The findings are startling. According to the survey results, about 40 percent of all respondents were trying to lose weight. About an equal percentage of athletes were concerned about their weight or body mass composition. Sixty-five percent of the respondents, nearly 600 women, reported that their body weight has an impact on how they perceive themselves and about 40 percent said that they defined their own value according to their weight. In addition, 15 percent of the respondents described their own eating disorders. 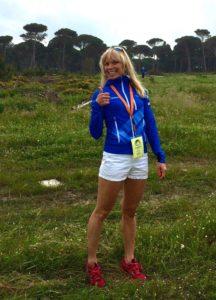 Katja Mjøsund, a Doctor of Medicine and a specialist in sports and exercise medicine from Kihu and Paavo Nurmi Centre, University of Turku, has worked with athletes in Finland, Sweden, Switzerland, and Norway. She has experiences with national team athletes in orienteering and rhythmic gymnastics, for example. What does a physician think about the female athletes’ responses?

“Many athletes feel themselves all right and find that losing weight is part of the sport and never even think whether this is normal but take it as a part of life,” Mjøsund explains. “They do not consider it a threat to their wellbeing. But that is wrong.

“This is nothing new and it has always been part of certain sports, also 50 years ago. It is not right that a healthy athlete considers herself successful depending on what the personal scales tell. If a person is losing weight all the time, it influences many bodily functions. In top sports, energy deficit affects development as well, including results development, recovery, risk of injury, and risk of overload. Even if one would cynically set aside mental wellbeing and health, energy deficit has a direct negative impact on development and results.”

“We were really happy with the response rate,” Ihalainen says. “Our cooperation with Kihu, the Olympic Committee, sport academies, and sports federations meant our questionnaire was shared via a large network. We are grateful for all the respondents and those distributing the survey link.”

Menstruation affects sports performances, but it remains a hard topic to talk about

Dr Mjøsund points out that menstrual flow itself is not important, but it does indicate that the underlying hormonal activity is functioning. If a woman’s energy supply is too low or her stress level is high, hormonal control becomes disturbed so that the periods disappear. These hormones are needed for the wellbeing of bones and muscles, for example.

“As you know, menstruation is a great, natural signal by which we can easily monitor hormonal functioning, recovery and energy balance.”

Despite the importance of this signal, 70% of the respondents said that they have not discussed menstruation with their coaches. Some felt no need to do so, while approximately half of the respondents felt it was a difficult topic to discuss.

“Talking about these issues is not considered to be easy, especially if the coach is a man,” Mjøsund says. “It would be important, however, for athletes and coaches to gain more knowledge about the issue. In addition to irregular periods, many athletes also have severe pains or intense flows. There is no need to keep suffering, as one can find help for these.”

The members of the research team are engaged in close collaboration with athletes. In Finland, Ihalainen has visited sports federations and coaching meetings, for example, speaking about female athletes’ periods, energy deficit and body mass composition.

“In Sweden, these topics were discussed much more and also more openly,” Ihalainen says. “There I could have made weekly speaker visits to different athlete communities.”

Both Ihalainen and Mjøsund emphasise that issues pertaining to energy deficit and the menstrual cycle are important in female athletes’ sports as well as in their lives. About 70% of the respondents reported symptoms related to the menstrual cycle, such as pains, while 40% reported that their periods affect their mental performance, for example. 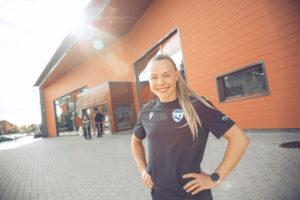 Emilia Joensalo is 25 years old and she is now playing volleyball for the second year at the highest national level, representing the volleyball club LP-Vampula. She says that when she was younger she used to suffer from menstrual difficulties. Like nearly a half of the female athletes answering the survey, Joensalo also uses hormonal contraception, which brings help for menstrual pains and flows as well. Yet talking about these issues with a male coach does not feel natural to her.

“In the world of sports, periods are rarely discussed,” Joensalo says. “I don’t find that talking about periods with the teammates would be embarrassing in any way, or that you couldn’t talk about it. When it comes to male coaches, the situation is different, though. I find that this issue is not to be discussed and talking about it can be challenging.”

Joensalo, who plays for Team Finland as well, also wishes there was more knowledge and discussion about nutrition and energy supply in the world of sports:

“When it comes to nutrition issues, I have found out much myself, but the nutrition-related information we receive from the team has been scarce. I have gained knowledge mostly from school. My own interest in nutrition has made me find out and invest in nutrition in a new way.”

Joensalo has graduated from the University of Jyväskylä with a  bachelor’s in sport sciences, in the biology of physical activity.

“The nutrition studies I completed as my minor have also helped me gain a broader understanding about the Importance of nutrition in sports performance,” Joensalo says. “During my career, watching my teammates and discussing with them, I have noticed, however, that many are unaware of its importance.”

Postdoctoral Researcher Ihalainen is currently involved in Training Room, a joint project of Kihu, Jyväskylä University of Applied Sciences, and the University of Jyväskylä. The project aims at developing preventive health care and injury rehabilitation for athletes as well as designing methods and action models that help athletes prepare for and recover from training.

In association with this project, research knowledge is collected about athletes’ strain, wellbeing and the connection of these factors to injuries and the rate of illness.

“When working with athletes, we often encounter questions and challenges related to eating habits, hormonal changes, menstruation and, of course, the effects of these on one’s performance,” Ihalainen says. “Every athlete should have someone with whom to talk about these issues.”

In the future, Ihalainen is going to pursue larger multidisciplinary research on female athletes together with clinical experts and disseminate research knowledge to promote the athletes’ wellbeing. This also calls for attitudinal changes among athletes, coaches and others working with athletes.