Where do you feel anger in your body? The stomach, chest, toes? How would you describe anger? How about other children – how do they experience the same emotion? These issues are being explored in day-care centres as part of the Papilio programme with the help of likeable pixie figures who express a range of feelings.

There are several intervention programmes available for emotional education. Papilio, a programme for early childhood education, is currently being studied in the Department of Education at the University of Jyväskylä. The programme has been adopted in two day-care centres in Jyväskylä, all nine centres of Jämsä, and a number of others in Western Finland Province and the Uusimaa region. Many other municipalities are also interested in joining.

The programme, which takes its name from a type of butterfly, uses four pixie characters that familiarise children with basic feelings. Weepybold represents sadness, while the other pixies include Angrybold, Afraidybold and Happybold. At each day-care centre, the whole staff is trained to work with the Papilio pixies.

The characters help, for example, when teachers and children wonder together how Weepybold might feel. Then they try to figure out how someone could help Weepybold. Could the solution be playing together, holding hands or hugging?

The importance of emotional skills has been taken into account in the Finnish early childhood education plan (2016) and its implementation. The importance of emotional skills has been highlighted in the media, for example, when trying to find solutions to children’s aggressive behaviour or preventing marginalisation. Emotional skills are significant for social skills, interaction skills and success in school, among other things. Emotions and the ability to recognise and manage them are crucial over one’s entire lifetime, not just in early childhood.

Papilio was developed in Germany to support the socioemotional competence and socially responsible behaviour of children between the ages of 3 and 7. The core of the programme utilises methods including stories, songs and the pixie characters to raise children’s interest and excite their imagination when practising emotional skills.

Guided by early childhood education teachers, the day-care children get familiar with each basic emotion for about a week. Emotions as well as their emergence and regulation are discussed and practised together while playing.

Each pixie is presented to children through the story “Paula and the Pixies in the Box” but also through voice recordings by professional actors. The pixies lead children to think about their emotions. Common discussions are a way to find how to better understand the emotion-based behaviour of yourself and others.

“Early childhood educators have noticed that children in the Papilio programme speak more about their feelings, are more empathatic towards others’ feelings and, as a practical example, more often include other children in their playing,” says Senior Lecturer Merja Koivula.

“Processing emotions with the pixies helps children to formulate abstract concepts so that it is easier to approach, discuss and learn to understand emotions. It is not nice to be angry, but you can reduce annoyance by saying that right now it’s a bit difficult because I’m feeling like Angrybold,” says Koivula.

Children’s skills in recognising and managing different feelings develop gradually and adult support is needed in the learning process, especially with finding words for feelings. Emotional skills are strongly connected to all behaviour. Regulation of emotions and socially responsible behaviour are significant for learning, peer relationships and overall wellbeing, among others. As Koivula says, “They help you to get along in life.” 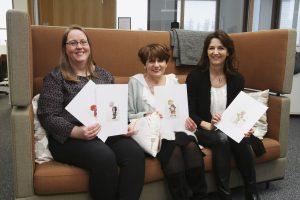 Papilio – Preventing Behavioural Disorders and Promoting Social-Emotional Competence in Preschool Children is a research project of the Department of Education at the University of Jyväskylä and the Rauma Teacher Training School of the University of Turku, led by Vice Rector, Professor Marja-Leena Laakso and Senior Lecturer Merja Koivula (Jyväskylä). In addition, the project includes Lecturer Riitta Viitala (Jyväskylä), Senior Lecturer Marita Neitola (Turku) and doctoral student Päivi Salo as researchers.

The project has received funding from the Ministry of Education and Culture.