In the spring when the coronavirus restrictions were introduced, many experimental studies stopped altogether. In the Accelerator Laboratory of the University of Jyväskylä, people are now playing catch up, staying busy with laboratory tests calling for international cooperation while maintaining compliance with strict safety measures. Among them is a French team testing the radiation resistance of satellite components. They arrived for their first week of work after a two-week quarantine and coronavirus tests. The same time-consuming and expensive procedure is awaiting them again in November. 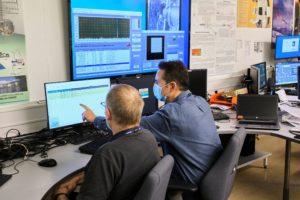 Radiation expert Ronan Marec (right) and component testing expert Guy Estaves from Thales Alenia Space watch their screens to see what happens when the beam of particles hits the device.

A group of researchers from the space technology company Thales Alenia Space are watching monitors in the control room of the radiation station at the Accelerator Laboratory in Ylistönrinne. At the other end of the laboratory, in a space isolated with sturdy concrete blocks, there is a particle accelerator, which is shooting intense ion beams at a satellite component. This subjects the microelectronic device to conditions similar to those it would meet in space, should it someday end up there as a part of a satellite as planned.

The component can be bombarded with multiple ion beams involving various elements such as oxygen, neon, argon, iron, krypton or xenon. The researchers watch their screens to see what happens when the beam of particles hits the device. The heavier the ions, the more energy they transmit to the component tested. The effect shows up on the monitors as increased errors in the operations performed by the component. 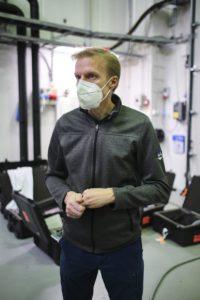 Staff scientist Heikki Kettunen is ensuring that the laboratory devices work flawlessly during the visit.

“The testing team is looking for a threshold value, for example, which indicates how easily errors occur in components,” explains staff scientist Heikki Kettunen, who is ensuring that the laboratory devices work flawlessly during the visit. “By varying the mass of the particles used in the bombardment, clear differences can be observed in the number of errors.”

“This is one of the best sets of equipment. Here we can work efficiently and we are working very hard every day to optimise ion beam availability”, says radiation expert Ronan Marec.

To Jyväskylä after a two-week quarantine in Helsinki

“In the coronavirus era, space industry researchers have also had to adopt flexible schedules. Within the strict frameworks of commercial agreements, there is no time to lose, however,” say Ronan Marec and component testing expert Guy Estaves.

“Investigations and bids cannot be continued before the components have been tested and we can show the results,” Marec points out. 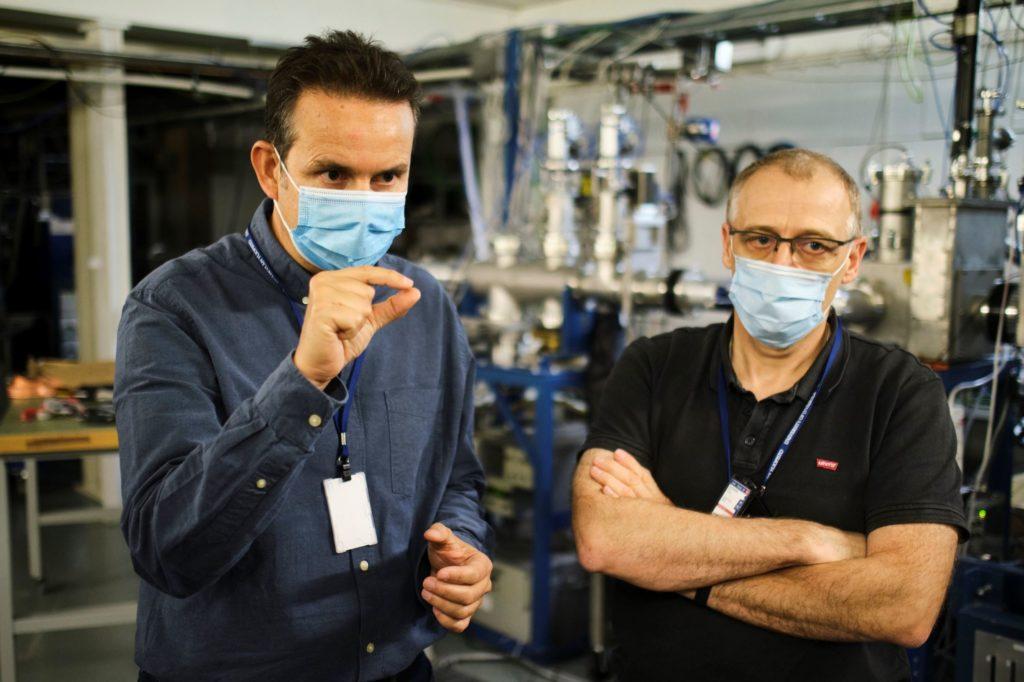 For the past fifteen years, radiation expert Ronan Marec (left) and component testing expert Guy Estaves and the French testing team has chosen the Accelerator Laboratory of Jyväskylä as their test site.

Travel arrangements began in August, when the team heard that the Accelerator Laboratory in Jyväskylä was again available. For the research visit, they needed letters of invitation from Jyväskylä, a coronavirus test before leaving their hometown Toulouse, and a two-week quarantine in Helsinki.

The work team of six members spent the quarantine in tight quarters in the same apartment in Helsinki. All in all, they feel that remote working there went quite well. They received food to the apartment through home delivery. In Jyväskylä, they chose a familiar hotel at a walking distance.

“Unfortunately, we have had no opportunity to go sightseeing in Jyväskylä during this visit.” 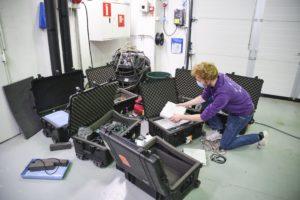 A large portion consists of radiation tests ordered by space industry, which are conducted at the Radiation Effects Facility (RADEF). The commercial use of the Accelerator Laboratory also includes sample material composition analyses by means of the Pelletron accelerator as well as expert services on radiation safety.

“Our assets include the quality of service, flexibility as well as high-energy ion beams,” says Heikki Kettunen. “Even at present, there are plenty of inquiries and prospective visitors, both from Europe and USA, even from as far away as Japan. We want to be flexible with our operations and keep bureaucracy to a minimum.” 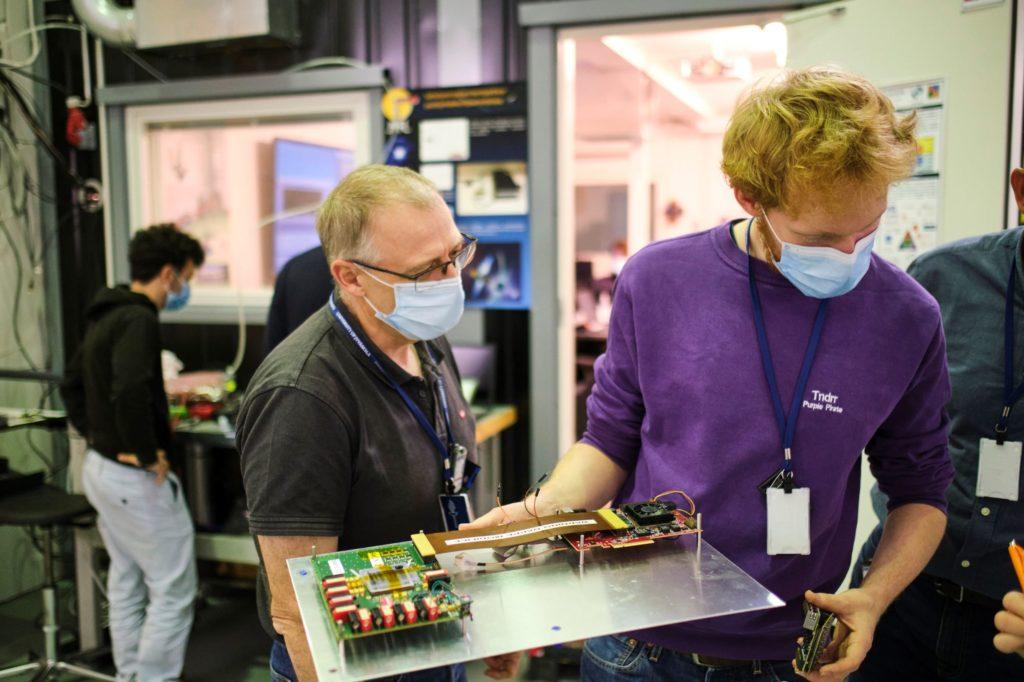 In space technology, the need for testing services is growing all the time, say Guy Estaves (left) and Charles Detemmerman.

During the visits, the laboratory staff is on the spot to operate the particle accelerator and the radiation station as well as to help the visiting researchers. Kettunen explains:

“In this coronavirus situation, people always wear protective masks while working. When necessary, we have also separated and restricted some parts of the facilities for customer use only. Company representatives stay on the department’s premises for their whole visit. We can also organise remote testing when dealing with electronically simple equipment. In such settings, the testers can control their equipment remotely from their home country, own laboratory or even from their own living room.”

In space technology, the need for testing services is growing all the time. Devices are packed with greater amounts of ever more miniscule and compact electronics, which increases the volume of testing.

“Testing becomes more complex all the time,” Marec says. “This means the size of our team members has grown all the time, too. At first, there were just two of us. Now there are six. We need several experts on radiation, microelectronics and software.”