Industrial scale in sight: valuable metals can be profitably recovered from e-waste

Gold and other valuable metals will no longer remain part of electronic scrap heaps. In the Department of Chemistry at the University of Jyväskylä, researchers will soon switch on a unique reactor system, which will point the way towards larger industrial applications. The department’s hydrometallurgical equipment suits well to the recovery of precious and rare metals. It currently operates on a six-litre scale, but an industrial concept is already in sight for the future. The carbon dioxide emissions from the recovery of metals from e-waste is estimated to be only one tenth compared to mining the metals from earth.

Full-scale plants could be built next to big cities, for example. They would revolutionise the recovery of rare and critical metals from waste materials, such as electronic scrap, says Professor of Analytic Chemistry and Circular Economy Ari Väisänen.

The hydrometallurgical system set up in the JYU Department of Chemistry can be used for modelling industrial processes. There is no more playing with test tubes but waste materials are processed in about half-kilogram portions. The volume of the reaction chambers is six litres – the size of a small bucket.

”Compared to the test tube scale, this gives more realistic estimations about the functionality of the methods on an industrial scale”, says Väisänen, who is leading research work utilising the new equipment. 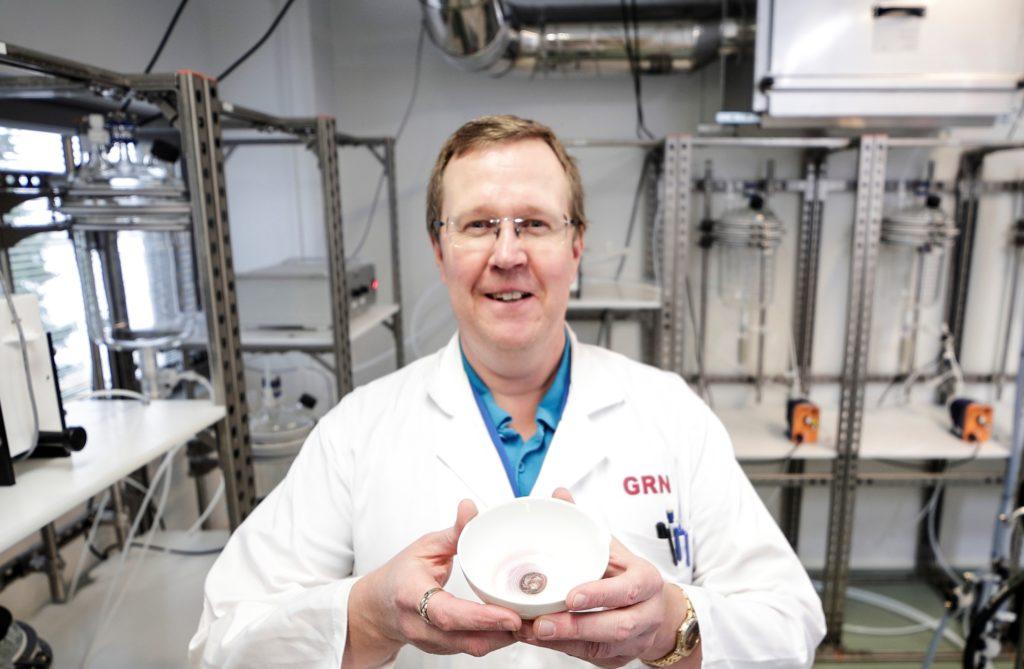 Researchers will use the experimental system to test and fine tune the recovery process, which includes a number of patents, so that it can be used in the near future in a plant with a much greater waste processing capacity. This processing plant is a joint project of the energy company Alva as well as the Tapojärvi and Elker companies. The plan is to build the plant in Jyväskylä.

“Optimising the process calls for extensive testing”, Väisänen says. “For example, we study the recycling of acids and how solids could be best separated from the solution.”

The system was set up in Ylistönrinne with the support of the European Regional Development Fund (ERDF), as part of the KITA project (focusing on research platforms for circulation economy). In addition, the project recently received funding from Business Finland.

No commercial players in metal recovery as yet

Important and rare metals are used, in addition to circuit boards in general, especially in computer hard drives, cell phone components, permanent magnets and catalytic converters. Although the recycling and processing of e-waste is already organised nationally, there is still no fully developed overall process for the recovery of metals nor any commercial players in this field.

“Although many people wish to help in recycling, and keep offering me old mobile phones as material, the process is not that simple,” Väisänen explains. “Before we can focus on the recovery of metals, the material must be sorted and each fraction appropriately pre-processed.”

The functioning of the hydrometallurgical system is based on acid solvents and on linking various metal recovery techniques into an integrated whole. 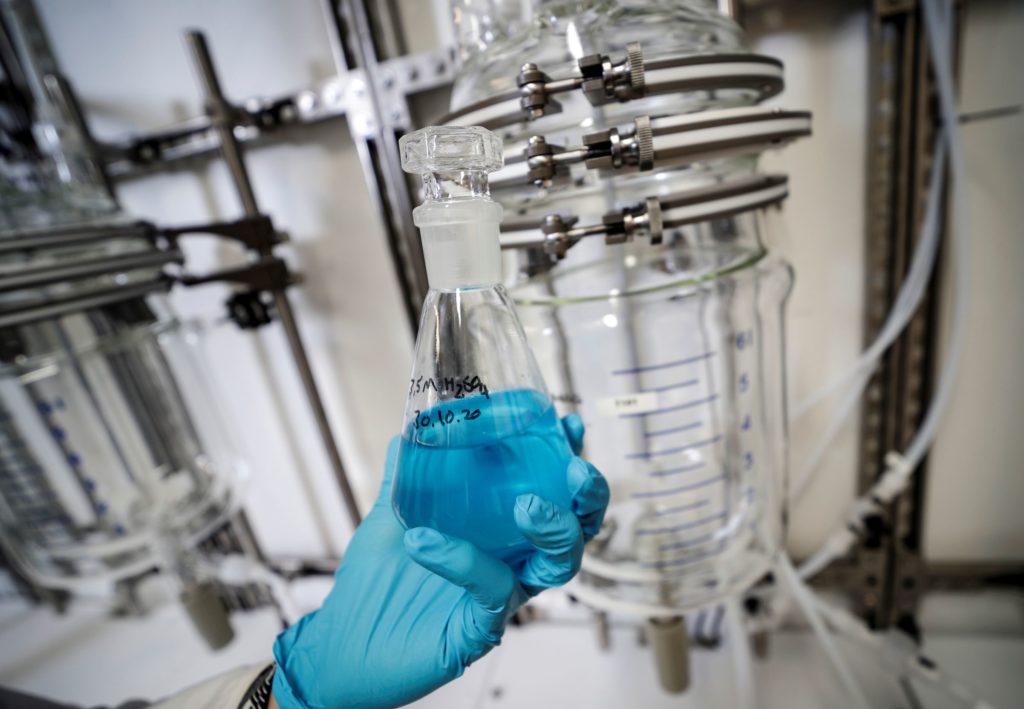 The metals are dissolved in the acid liquid.

The refinement of the process is related to the 4D-Filter scavenger technology, which has been developed at the JYU Department of Chemistry. The functioning of the scavenger is based on chemically active molecules. In a scavenger chamber, a reaction takes place where the target metal or metals are captured from the stream of acid solution. The metals can then be washed out from the scavenger, after which it is ready for use again.

After the gold is recovered, where does it go?

The equipment in Ylistönrinne has now been adjusted especially for the processing of circuit board waste. The scavengers gather gold, silver and platinum group metals as well as rare earth metals.

In the Department of Chemistry, gold is not gleaming when it flows from the reaction chamber.

”At first, the gold is drawn out as a solution, from which it is then reduced and refined into a solid form”, says Project Researcher Antti Tiihonen from the Department of Chemistry.

A kilogram of circuit board waste yields about a gram of gold. Where does the gold go after the department?

”The gold yielded by the system remains on display in the department as evidence of the functional process”, tells Ari Väisänen.

Less widely known recovered metals include, for example, rare earth elements such as neodymium and praseodymium, which are used in permanent magnets, as well as palladium, which belongs to the platinum group, and germanium, which is used in semiconductors. The EU classifies these as critical raw materials, involving considerable risks in terms of supply, price trends and substitutability.

”One kilogram of permanent magnets contains about 300 grams of neodymium and 40 grams of other rare earth metals”, Väisänen estimates. 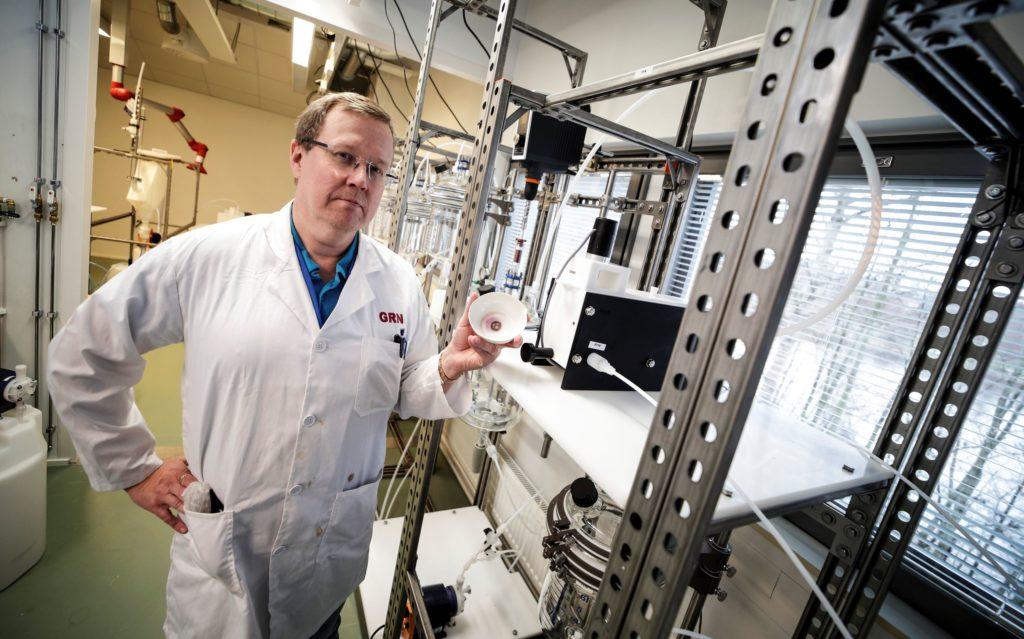 The gold yielded by the system remains on display in the department, says Ari Väisänen.

How does the process work?

The raw material, circuit board waste, is delivered to the Department of Chemistry by Elker Oy, which is specialized in the recycling of e-waste. The waste mass consists of crushed and incinerated circuit boards. Incineration removes, for example, plastics and resins from the electronic components.

When the waste fraction enters the reactors, it is mixed in phases with different acids. Metals are dissolved in the acid liquid, after which solids are removed from the solution. Next, the solution passes through various extraction phases and is finally drained through a chemical scavenger or directed into another device for electrolysis. The process is designed so that in its different phases, it is possible to isolate specific metals from the solution.

When the desired metals have been collected, they are passed to further examination, such as purity analysis, conducted on other devices in the department.

The extraction process also creates some waste. Part of it is delivered for disposal as ordinary chemical waste while a small part is dealt with as a hazardous substance. Most of the waste is neutralised and made harmless during the process.

The investment in the new equipment at the Department of Chemistry supports the processing of metals for high technology while also promoting environment-friendly goals. The development of recovery technologies belongs to the field of chemical circular economy, which is one of the focal areas of the department’s research. The research promotes sustainable use of natural resources.

“As our lifestyle becomes increasingly technological, the need for metals is growing enormously. At the moment, we are wasting these valuable raw materials in many places because of deficient waste processing.”

One strength of the new recovery process is that the internal circulation within the system can be effectively closed by recycling the acids. Väisänen hopes that the system prepares the ground for future international innovations:

”A factory concept would be an export item. I have heard comments that a metal recovery unit based on this technique should be located near almost every metropolitan city.”

Link to the website of chemistry circular economy research