Prospective class teachers are practising interaction skills in a new way in Jyväskylä. Pedagogical interaction skills are now highlighted in teaching practice periods, says Associate Professor Eija Pakarinen from the Department of Teacher Education, University of Jyväskylä. The emphasis on these skills inspires experienced teachers as well: interaction is the core of this work, where people should have time for professional development.

The new emphasis on practice is based on what has been observed in numerous studies: warm interaction between teacher and pupil effectively supports the pupil’s learning motivation. 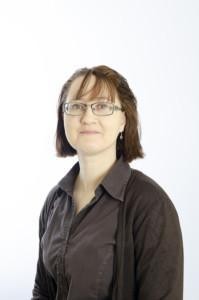 ”It is about encountering pupils so that the teacher learns to know them and their individual needs,” says Associate Professor Eija Pakarinen from the Department of Teacher Education, University of Jyväskylä. “At the same time, this makes it possible to discover things that interest pupils and inspire learning.”

This is also pioneering work when talking about pedagogical interaction skills, Pakarinen explains:

“We need shared concepts to define when interaction is high quality. Otherwise, the discussion will be mere fluff. The model is firmly built on research.”

Initial feedback on the new model has been positive. In two teaching practice periods, the teacher students also videorecord their own work. Interaction is reviewed together with other students and supervisors. As an aid in skills development, the students have a form that breaks down interaction into concrete stages.

“Students have said that they have benefitted from peer feedback,” says Postdoctoral Researcher Sanni Pöysä, who has been responsible for implementing the model. “It has been easy to identify one’s own success in the videos.”

How is a positive climate created in the classroom?

The model has already been tested in in-service training for class and subject teachers as well. 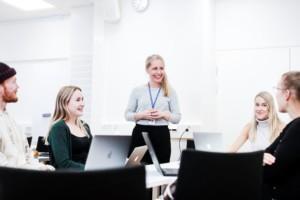 “Teachers have been satisfied with the opportunity to concentrate on the issues of interaction and feedback,” says University Teacher Laura Ketonen. “These are found to be essential in their work. We have received positive comments on the fact that teachers have had a chance to focus on themes they find personally interesting in the training.”

The model is called Interaction as part of teacher’s evaluative competence (VOPA). It was piloted in 2019 and was adopted for teaching practice periods last autumn. The hope is that the model could also produce learning material for teachers and be introduced in subject teacher education.

Eija Pakarinen says that Finnish teachers are particularly good at classroom organization, a fact that is also demonstrated by international comparisons.

“Teachers walk around in the classroom, pupils are provided with individually tailored assignments, and there are no empty moments during classes,” Pakarinen says. “Pupils have a chance to make small autonomous choices during a lesson. These approaches help build a basis for learning motivation.”

According to a number of studies, pedagogical interaction consists of three components, which are all connected to better learning results, wellbeing, and motivation: emotional support, classroom organisation, and instructional support.

Pakarinen explains: “Emotional support refers to a teacher’s ability to support the interaction relationships and positive climate both between the teacher and pupils and among pupils. Emotional support includes close and warm interaction relationships, shared positive emotional expression, and showing mutual affection. Teachers can contribute to a positive climate by their own example and requiring that pupils demonstrate respectful and appreciative interaction toward others.”

When is the interaction between a teacher and pupils successful?

“Optimally, there is a positive climate in the classroom, the interaction relationships are warm and encouraging, and the teacher is able to recognise pupils’ individual needs and respond to these in a timely and sensitive manner.

“Pedagogical discussions activate thoughts by means of open-ended questions and give room for joint problem-solving and consideration of matters, thus increasing understanding about the subject matter concerned.”

Give feedback with the right attitude

Feedback is also closely connected to interaction processes in the classroom. Good feedback given in a positive atmosphere is effective: it promotes a pupil’s skills and self-regulation. One needs to know how to give and receive feedback, and even with the right attitude, says Laura Ketonen, who has studied feedback and peer assessment. 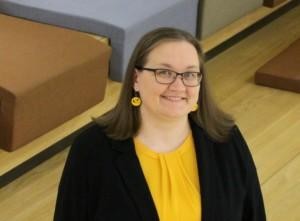 Sanni Pöysä has been responsible for implementing the model. Photo by Christina Mantsinen

According to Ketonen, the feedback culture in schools has until recently been such that feedback is given by the teacher and received by pupils:

“It is important that the teacher becomes better in providing feedback. It is equally important that pupils eventually learn to seek and utilise feedback. In general, schools should also approach the issue by considering why feedback is given.”

Videorecorded teaching situations have proved useful for the development of feedback skills as well. Teachers’ videos of their classroom work offer examples of all types of feedback, Ketonen says.

Research has shown that developing one’s own  pedagogical practices is easiest together with others. Many teachers would also like to develop their skills together with their colleagues.

“Enough time should be reserved for the process,” Ketonen says. “As a rule of thumb, I would say that putting new things into practice takes a year at minimum. Principals could reserve time for these efforts in joint meetings and on planning days, for example.”

Here are some of Ketonen’s hints on how to provide feedback in the classroom:

According to Ketonen, it pays to give a pupil feedback especially on successful self-regulation, such as on successful division of labour in groupwork or when the pupil’s persistent work led to accomplishing the task.

Most often feedback is given for a particular assignment, but it does not help with the next one. Feedback can also have negative impacts on learning. When targeted at the person, it can be detrimental, Ketonen says.

“A teacher should not rely solely on giving feedback, as also the skills and attitudes of the recipient play an important role in the process. The ball can be thrown to the pupils: to discuss with them the meaning and use of feedback, and for instance, what to do if feedback is annoying or feels unjustified.”

For more information on the development of pedagogical interaction skills and related in-service training, contact the designers of the VOPA action model: Postdoctoral Researcher Sanni Pöysä, Associate Professor Eija Pakarinen, University Teacher Laura Ketonen, Senior Lecturer Sami Lehesvuori, and Professor Marja-Kristiina Lerkkanen from the Department of Teacher Education, University of Jyväskylä. The VOPA action model has been developed as a part of the OPA project funded by the Ministry of Education and Culture