Anu Kankainen, a nuclear astrophysicist from the Department of Physics at the University of Jyväskylä, leads a research group that is uncommon in Finland. Space is ancient and full of stars and star dust – and it can give answers to the mysteries of the origins of elements, such as what kind of stars create valuable gold and silver and hurl them to the space between stars.

Almost all chemical elements we know are created in stars as the end results of various nuclear reactions.

The nucleosynthesis of lighter elements has been known for more than fifty years, and a few years ago researchers also started to grasp the origins of elements heavier than iron.

Recently, researchers were able to observe a merger of two neutron stars,where heavier elements are believed to be born. The collision known as GW170817 took place in the Hydra constellation 130 million years ago andwas measured with gravitational wave detectors  inin Europe and America as well as with different kind of telescopes.

The measurements succeeded only two years after gravitational waves were discovered in 2015.

However, the neutron-star merger event  did not provide direct evidence on the origin of silver, gold or lead”, says Associate Professor Anu Kankainen, from the Department of Physics at the University of Jyväskylä.

“Even though the kilonova, the afterglow of the collision, is compatible with the hypothesis that the collision produced a lot of heavy elements, there were no direct observations of individual elements”, says Kankainen.

However, a recently published study could identify strontium being present in the kilonova of GW170817.

“The study was based on a precise analysis of the electromagnetic spectrum of the afterglow, revealing a feature characteristic for strontium. The collisions produce large amounts of strontium, which is easier to detect than gold, for example. In the future, new measurements of radiation created in the collisions may reveal signs of other elements as well”, Kankainen says.

The exact origin of several chemical elements is still unclear. This group includes valuable elements that are becoming endangered on Earth, such as iridium, platinum and gold. The interpretation of astrophysical processes requires collaborations between researchers from different fields.

Nuclear astrophysicists study the creation of chemical elements, for example via experiments in accelerator laboratories like Kankainen. In turn, astrophysicists focus more on the properties and physical characteristics of astronomical objects and astronomers make new observations of these objects in observatories or space telescopes. In addition, theoretical calculations and modelling in all of these are required.

Will this group confirm how gold and silver, among other elements, are formed in the universe?

“They certainly will, but it is hard to forecast when. It helps that the number of measurements and observations will increase now when the gravitational wave measurements can point the right direction in spacefor telescopes”, Kankainen evaluates.

The mass of a star affects the elemental nucleosynthesis occurring in its core. Stars are made of hot gas, plasma, and their masses partly regulate the reactions and processes  creating chemical elements. 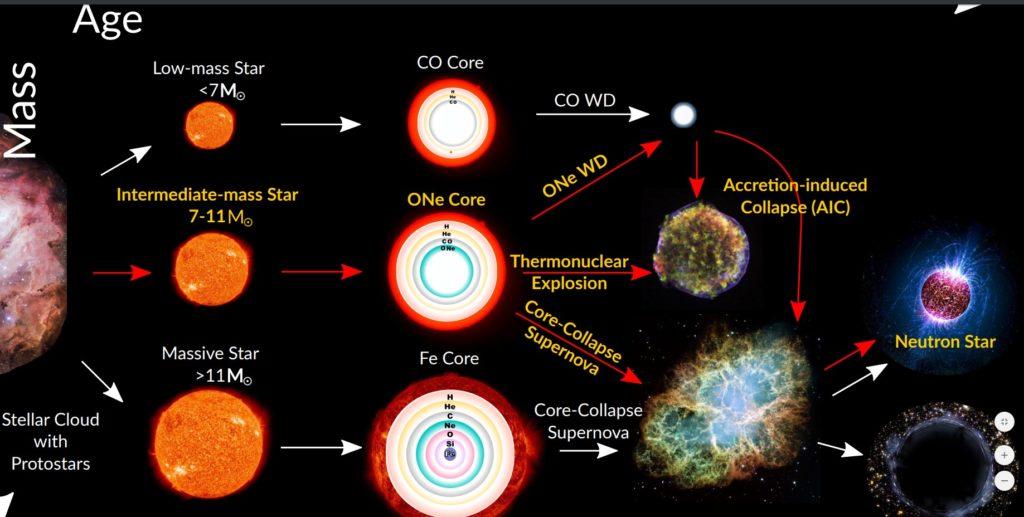 We already know how low-mass and massive stars evolve: when energy runs out from the stellar fusion reactions. A low-mass star such as our Sun becomes a white dwarf. On the other hand, massive stars explode as supernovae and leave a neutron star or a black hole as their remnant.

A new study by Kankainen and her European colleagues sheds light on the fate of intermediate-mass stars and their role in the production of chemical elements. The study clarified what happens to these rather common stars that are seven to eleven times larger than the Sun.

The research group measured the beta decay of fluorine-20 isotope at the IGISOL facility of the Accelerator Laboratory at the University of Jyväskylä. Based on the measurement, it could be determined fast fluoride-20 nuclei capture electrons.

“The study proposed that the fate of an intermediate-mass is a thermonuclear explosion. In these explosions, produced material disperse into the environment and, for example, the radioactive iron-60 isotope in the deep sea sediments may originate from the explosions of intermediate-mass stars”, says Kankainen. 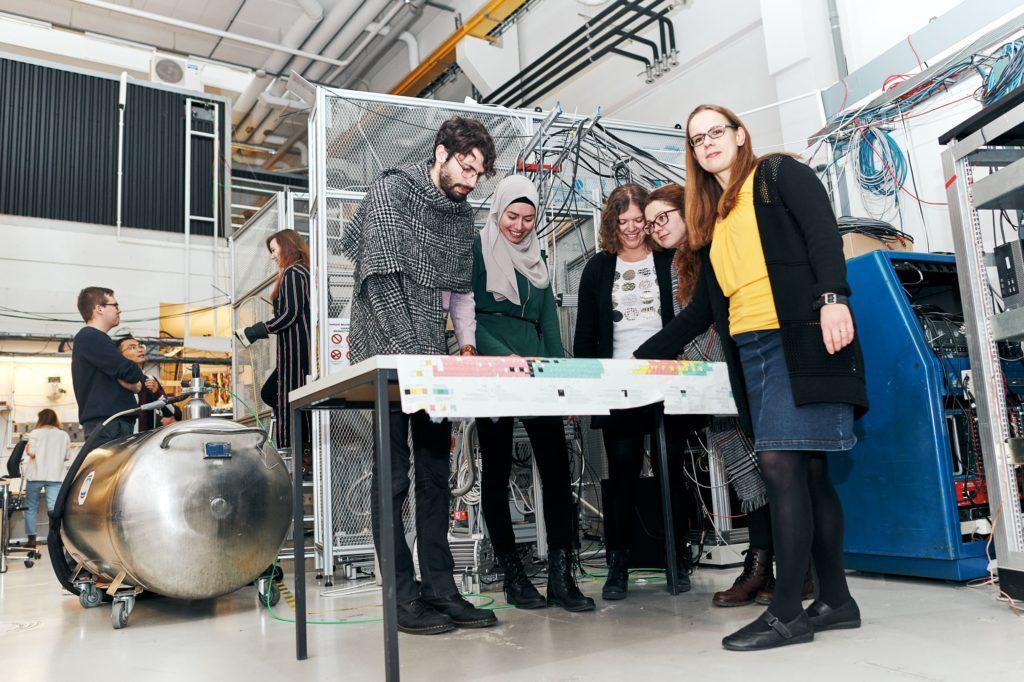 Anu Kankainen (right) runs Finland’s only research group in nuclear astrophysics at the Accelerator Laboratory in the University of Jyväskylä. She is working with Clément Delafosse (left.), Lama Al Ayoubi, Sarina Geldhof and Olga Beliuskina.

“It keeps researchers aware of open questions in the field and the research that is conducted to give the right answers”, she says.

The role of nuclear physics is essential for understanding the creation of chemical elements.   By accelerating stable ion beams and making them to collide with target atoms creates radioactive nuclei whose properties can be studied. For example the masses of the produced nuclei can be precisely measured or the way and the rate at which they decay can be detected. Without these basic data it is impossible to model, for example, the production of elements in stars.

In addition to the known 118 elements, researchers try to make new elements using accelerators at international laboratories. The creation of superheavy elements beyond the heaviest element known to date, oganesson, has been attempted by colliding  beams of titanium, chrome or iron ions into various target materials for example at JINR laboratory in Russia or at GSI in Germany.

“However, this has not succeeded yet”, says Kankainen.

How could new superheavy isotopes be used?

“The amounts produced are minimal, so direct use is quite impossible. However, research provides important information on the structure of these heavy atomic nuclei, which helps to understand also the elemental nucleosynthesis inneutron-star mergers”, Kankainen says.