In the early 2000s, Anita Malinen had a very scientific dream. Wouldn’t it be great if we could take an interdisciplinary look at learning processes during an actual learning situation?

It is March 2019, and postdoctoral researcher Jarno Mikkonen is placing an EEG cap on an Air Force Academy cadet’s head. The cap records the cadet’s brain’s electrical activity. The room is cramped: it is small and full of flight simulator equipment. This is one of the very few times the university’s EEG equipment has been moved outside the university.

The project for which they are working combines strong expertise in studying the brain and the autonomic nervous system with scientific innovation and learning in a simulated environment, which is one of Central Finland’s strengths. The Meaningful Moments in Learning project is conducted in cooperation with the Air Force Academy and Firstbeat Technologies. It comprises researchers from the Faculty of Education and Psychology, the Department of Teacher Education and the Centre for Interdisciplinary Brain Research. 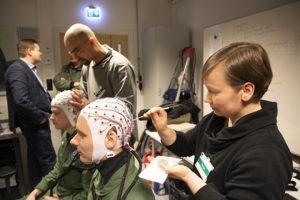 The cadet – equipped with the EEG cap and a heart rate monitor – and his trainer move over to the flight simulator. With the cap and the heart rate monitor, the small camera recording the events inside the flight simulator is a sure sign this is not a routine situation. Despite the research equipment, the cadet is facing an otherwise normal training session. The cadet receives instructions and air traffic control guidance from the trainer while flying in the simulator. The trainer takes more detailed notes than usual, but this does not affect his student’s actions.

The next day, the cadet comes in to meet Anita Malinen, a lecturer in educational sciences. He watches the recording of his training session and assesses both his own and his trainer’s actions during it.

“The students point out ‘fractures’ in the learning situation,” says Malinen. These fractures can be defined as an overall sense of discomfort and uncertainty, which, according to Malinen, are key to learning something new. “These fractures force us to doubt our own thoughts and opinions, as well as our usual working methods, and even ourselves in general. The fracture confuses, surprises and ‘forces’ an adult learner out of their habits and routines,” says Malinen.

The project’s long-term goal is to improve personalised learning processes and advance the research of learning processes. The project has already been developed and has been on-going for several years in an interdisciplinary capacity. The aim is also to create a basis for development work, which will enable building a better understanding of the needs of education. In future, the results of the research may be applied to support the needs of personalised learning as well.

“With the help of modern research methods and cooperation, we are able to see the connections between knowledge, skill, feeling and functionality. For the first time, we can take an innovative look at the interaction between the experience of the student and the teacher by combining qualitative and quantitative metrics,” Senior Researcher Mikko Vesisenaho sums it up. The first data set was gathered during small group meetings and lectures for university students.

It came as a pleasant surprise to the researchers that the Air Force enthusiastically took part in the project. The cooperation with the Air Force Academy brought with it a grand and unique research environment. In future, it is planned to study the way skills and knowledge are developed in other contexts as well, such as rehabilitation, logistics and forestry studies. The project is funded through the Regional Council of Central Finland’s AIKO fund (Regional innovations and experimentations (in Finnish)). The fund’s aim is to support projects that strengthen the renewal and globalisation of Central Finland’s key strategic areas and improve employment in them.