Fieldfares enjoy a bumper crop of berries this winter – Ask about nature!

The plentiful supply of rowan berries and fieldfares feeding on these have delighted bird expert Heikki Helle in this winter. Helle, Minna-Maarit Kytöviita, Jari Haimi, and Timo Marjomäki are nature experts from Jyväskylä, and they will shed light on this winter’s situation in the Winter Nature Evening on Tuesday 25 January.Send your questions and observations to this online broadcast already in advance.

Such a rowan berry supply is unprecedented! Biologist Heikki Helle has observed nature in Central Finland for over 20 years, and this winter is the best one in terms of berry supply. Rowan trees have yielded well-preserved, orange-red berries up until now. Owing to this food supply, large flocks of fieldfares have delayed their autumn migration. 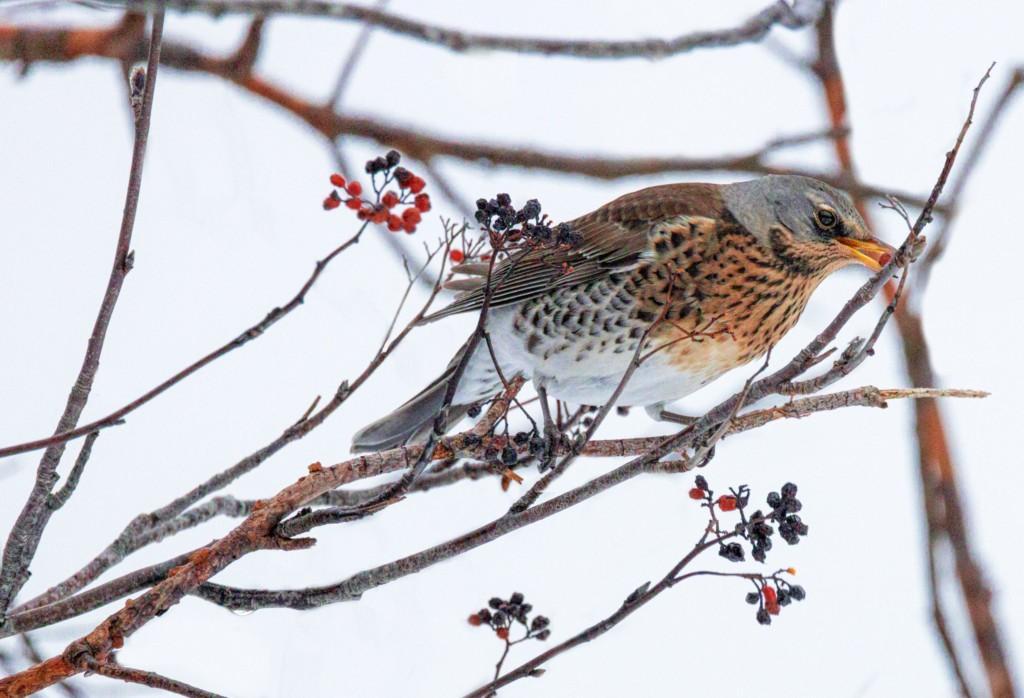 Do you recognize a fieldfare in its wintery appearance?

People have asked about the birds in this winter from Helle as well, as the view has been surprising to many nature observers. The reason for this is that many people have failed to recognise the species in its slightly lighter-coloured and fluffier wintery appearance.

“There have been huge flocks of even thousands of birds for people to amaze in this winter”, tells Helle who works as an expert in BirdLife Finland.

Are also berries that have already turned black still likeable enough for fieldfares?

”According to my own observations, only as a last resort”, says Heikki Helle.

According to him, other delights of this winter include observations of pine grosbeaks, which bird species can be found in Central Finland in best berry years only. Earlier, at the beginning of winter, also bramblings fed on berries.

”Also brambling is a northern species unfamiliar to many people in Central Finland, but last autumn many people could watch this species close-up in a rowan tree in their home yard”, Helle tells. 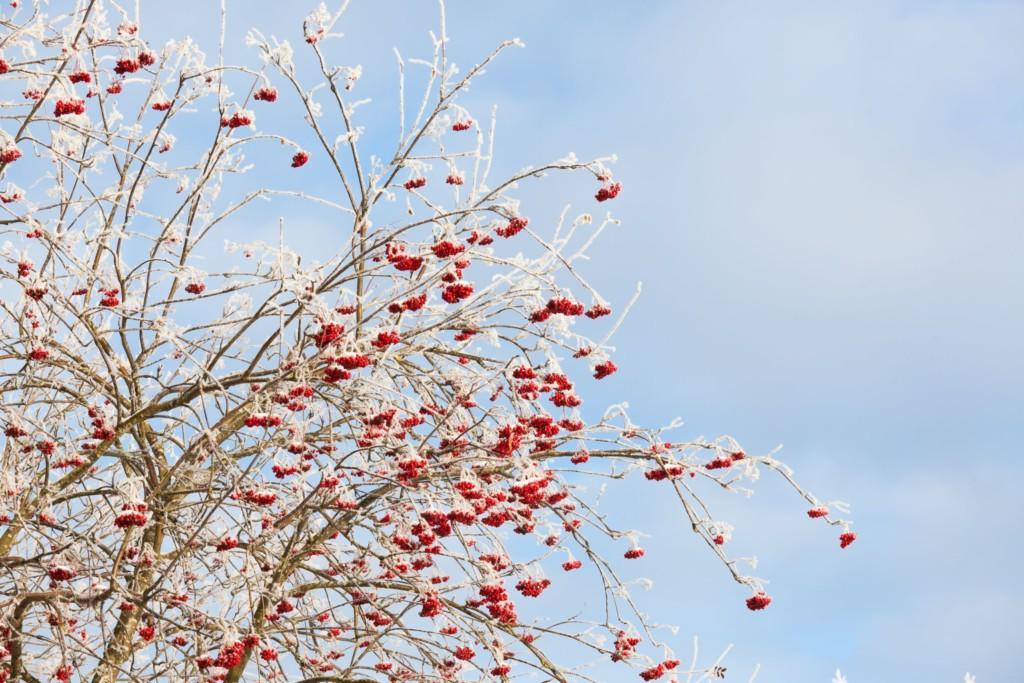 This winter is the best one in terms of rowan berry supply in Central Finland.

Finally, in the beginning of January, also flocks of waxwings arrived, perhaps having first eaten up the berries available in forests.

”The movements of berry-eating birds are rather unpredictable and partly unknown, but probably in this excellent berry winter the birds have had berries available for exceptionally long in rowan trees growing in forests as well.”

Helle is also interested each year in the size of mole populations, since it is a good predictor for the coming season for owls.

”Mole populations seem strong, though there is some local variation. This is promising for mole specialists such as Ural owl and boreal owl. As we know, in a poor mole year Ural owl can skip nesting altogether”, Heikki Helle states.

Also plant ecologist Minna-Maarit Kytöviita has noticed the plentiful crop of rowan berries, and there are now lots of spruce cones as well.

Is there any explanation for these good crops or periodical variations?

The amount of berries and cones depends on many factors over a longer period, says Kytöviita, who works as a Lecturer at the University of Jyväskylä.

”The berry production of insect-pollinated plants like rowan trees is based on successful pollination and rich blooming. The fruit buds of plants are formed in the previous year; hence, the warmth of summer 2020 made plants blossom richly in summer 2021.”

”Luckily enough, at the time of the blooming of rowan trees in summer 2021 the days were warm and sunny so that polluting insects visited eagerly in the flowers.”

On the other hand, although spruce is wind-polluted, it also needs suitable, i.e. not rainy, weather conditions for pollution.

As regards the Finnish flora, we also need to observe the soil frost in wintertime. Now plants are nicely protected by the snow cover, but in December the freezing temperatures were encountered before proper protection offered by snow.

Winter came earlier than usual, there was not much snow still in December, but the temperatures fell rather low. This means that soil frost may have reached quite deep in earth. It can damage plant roots. In spring, the deep soil frost may be problematic especially for evergreen plants, Kytöviita says.

An evenly cold and snowy winter is a good thing for insects and other invertebrates. Also mosquitos are doing well in this winter: Low temperatures did not reach and harm mosquito eggs in the ground as the protective snow cover came in time, says insect expert, Senior Lecturer Jari Haimi from the University of Jyväskylä.

Like in every Christmas, the usual insect guests came in Haimi’s house as well. Along with the firewood, several wintering wasp queens ended up indoor and after warming up for a while they crawled out from between bark and wood and started to buzz around the ceiling light.

They can well survive despite this broken winter rest if returned quickly back in the cold.

”A queen needs to be placed first in a cool environment as soon as possible and then outdoors to continue its wintering. It is best to slip it in some kind of a shelter under snow”, Haimi advises.

“A wasp’s tale is finished, if you start to feed it indoors with a sugar solution, for instance.”

There is also busy life going on in the soil and on the ground under snow when the weather allows. Various mites, springtails, earth worms, and spiders can be active throughout the winter.

Earth worms spend the winter typically of each species.

By what means do they get along, and do the freezing temperatures reduce their populations?

”A big common earthworm escapes the cold by digging its tunnel below the soil frost line, and others increase their body liquid concentrations to prevent freezing. Only very cold temperatures without a snow cover can be fatal to them”, Haimi explains.

Burbot and vendace as wintery targets of interest

Fish biologist, Lecturer Timo Marjomäki is already preparing himself for the start of the burbot season. The first batch of burbots spawn at the end of February at shoals, but in Konnevesi in Central Finland the second batch do it a month later, at the end of March, possibly in depths of over 30 metres.

”Fishermen have known about these two kinds of burbot for long already. In recent years, the diversity of burbot has been studied at the University of Jyväskylä as well. The research idea came from an experienced fisherman from Konnevesi”, Marjomäki tells.

”Most recently, we have researched with Lecturer Anssi Karvonen and our Bachelor students various parasites living in the eyes of burbots; burbot populations living in different places have different loads of parasites hampering their eyesight.”

In the future, the researchers wish to explore, by means of ultrasonic transmitters, the movements of burbots in different seasons and also to study burbots genetically.

”There is evidence about the rapid differentiation, or even speciation, of fish populations reproducing at different times and different locations within the same lake, for example in whitefish and Baltic flounder populations.”

During winter, the fish researchers of JYU, led by Professor Juha Karjalainen, also investigate the prerequisites for the reproduction of vendace. In the autumn, we followed how vendace spawn was distributed in southern Konnevesi regionally and in terms of depth. At the same time, we calculated the total amount of spawn released. In spring, once the lake is again free from its ice cover, we will investigate how many fishlings hatch from the spawn.

“Vendace roe is tasty food also for others than just Christmas people. Many fish species and smaller aquatic fauna feed on spawn throughout the winter, and thus usually only few percent of the spawn survive from autumn till hatching in the spring”, Marjomäki tells.

Send your questions and nature-related observations in advance to the Winter Nature Evening online broadcast on 25 January 2022 at 6-7: 30 p.m. You can find a form for questions as well as contact information and a link to the broadcast in the event news. The event will be held in Finnish.