Demand grows for experts in bio and circular economy

Applied chemistry has long played an important role in developing methods for sustainable production with minimised environmental load. At the University of Jyväskylä, the circular economy has been part of the research and teaching in applied chemistry since the discipline was established nearly 25 years ago.

Circular economy is a concept used in various contexts. It is typically conceived as keeping different materials within the consumption cycle for as long as possible.

“It mainly refers to the efficient and maximally sustained circulation of virtually carbon-neutral biomasses in society,” says Raimo Alén, Professor of Applied Chemistry. “Although it is good to strive for using waste as raw material for chemical products or as energy, it is nonetheless more effective to develop manufacturing processes that lessen the creation of waste. In fact, according to the EU, there is actually no such thing as waste; it’s always raw material for something.”

Return to the green economy 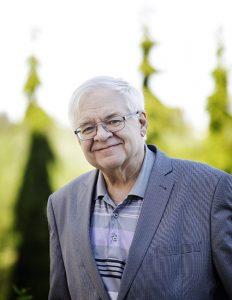 Professor Alén is fairly optimistic about the future of the Earth. He considers the recent history of humankind in terms of eras of different raw materials. Along with the petrochemical industry, the oil-dominated era started in practice as late as in the 1950s; before that, since the industrial revolution, coal had played the main role. Now we are returning to the green economy which prevailed before the era of coal. In this era, biomass will once again have a significant role.

In Finland, the key areas of the bioeconomy and the key factors of sustainable growth include forestry as well as the side streams of food industry and agriculture. These can be used in the production of chemicals and as raw materials to replace partly fossil-based material, such as plastic.

“In the future we will use renewable raw materials, which contain large amounts of carbohydrates,” Alén explains. “Biomass can be considered to include all plant material produced by photosynthesis, but also animals. In these solar energy is bound to chemical substances, which are used in industrial processes. It is also important to develop new ways to recycle materials for even longer terms. For example, paper fibre can be recycled five times, as can some bioplastics, but we are seeking to lengthen their time in circulation.”

According to Alén, the biggest problem in the energy use of fossil raw materials relates to its harmful environmental effects, which is a primary reason for the development of bio-based fuels for vehicles. For example, bio-based ethanol and butanol can already be added to the fuel tank, but the need for further research in this field remains.

In the future, it will be absolutely necessary to invest in the circular economy in both education and manufacturing. Along with industry, educational and research institutions have usually understood the huge importance of this field. There is a demand for experts.

The efficient and effective use of biomass calls for, besides knowledge of their composition, specific understanding as to how their chemical components can be versatilely used on an industrial scale. Besides the chief components such as cellulose, hemicellulose and lignin, various extract substances, often due to their physiological effects, are significant in medical use, for instance.

Professionals in applied chemistry know how to analyse the composition of substances and master process chemistry. Alén further reminds us that such expertise is also needed in the refining of biomass. Good general knowledge is always valuable. One needs to understand holistically how different kinds of biomass supplies can be optimally exploited.

For the time being, about 230 master’s degrees and 70 postgraduate degrees have been completed in applied chemistry at JYU. These graduates have been successfully employed in industry and cooperation works well also with regard to theses and dissertations Nearly all of them have been carried out with external funding, and the innovations made in them can often be adopted directly, and with little cost, by major industries.