The Vuokatti unit of the University of Jyväskylä plays an important role in training and testing Chinese athletes at Vuokatti Sport Academy towards their goal of the Winter Olympics 2022 in Beijing.

Vuokatti Sport Academy in Sotkamo will accommodate hundreds of Chinese athletes in the coming years. The Academy has signed several agreements with China on the visits of representatives of different sports, says the director of the Vuokatti Training Centre, a JYU alumnus, Jyri Pelkonen.

– Since last year we have received groups systematically, Pelkonen says. In February this year a group of 16 athletes arrived and they are still staying at the Academy because their visit lasts a year. And now in August we received the next group, who will stay here for several months at least.

The Academy has attracted a number of skiers and snowboarders, for example, and in the autumn a group of ice hockey players will come here to train. From China we have also received gifted athletes in rowing and canoe sports who have been introduced to cross-country skiing.

– Some of the group that arrived in February had not even seen snow before, but now in August they can already perform pretty fast-paced exercises on regular and roller skis, says Pelkonen describing the progress of the Chinese athletes. The purpose is not to convert everybody into skiing, but if someone proves to be especially talented in it, this person can stay and train here for a longer period.

Cooperation with the University

The Sotkamo-based unit of JYU played an important role in getting the Chinese athletes to Vuokatti. Professor Vesa Linnamo says that the first contacts were established during a visit to China a few years ago. The Chinese have received contacts and visitors from many countries with relation to various training and coaching issues after Beijing was selected to host the Winter Olympics 2022.

– The same week as when we were visiting the University of Beijing, they had seven foreign delegations there presenting their respective affairs, says Linnamo.

A particular asset in Vuokatti is the tight integration between research and training. Vuokatti can offer high-quality training and coaching, competition-like conditions, testing and accommodation all in one place. The Vuokatti Ski Tunnel and the first-snow trail, which opens every year on 10 October at 10 a.m., have long attracted numerous international visitors to the Sport Academy at times when there is otherwise no snow available for skiing. 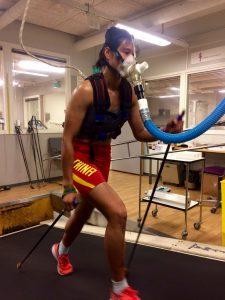 – Finland’s success in ski sports has contributed to the growing interest in our systems, Linnamo states. Olympic gold medallist Iivo Niskanen’s coach Olli Ohtonen, who is completing his doctoral dissertation in Vuokatti, is a big name internationally.

Pelkonen also acknowledges that the Vuokatti unit, which concentrates on snow sports and related research, has been an excellent competitive asset and addition to training expertise.

– We have collaborated with the University for many years and carried out several projects. Everything has gone very well, cooperation is smooth, and the Chinese value our approach, which integrates research and training, Pelkonen explains. The University is the first place we turn to when recruiting coaches and language teachers, for instance.

Both Linnamo and Pelkonen believe that some of the Chinese athletes currently training in Vuokatti will represent their country in future Olympics and might even become Olympic medallists.

– Chinese athletes are very easy to work with and they eagerly participate in everything, Pelkonen says.

While the Beijing Winter Olympics in 2022 may be too soon for any of these young Chinese athletes to medal, Pelkonen thinks that they may well achieve such a level in the next Winter Olympics after Beijing.