Do you gaze at clouds, watch birds or hunt for mushrooms? Have you sent your observations to museums or research groups with a mobile app? Are you a member of an association or a group that cooperates with museums or research institutes? If you answered yes to one or more of these questions, you may be a citizen scientist.

“Citizen science” is a term for systematic activity in which non-professional researchers voluntarily promote scientific research by collecting new data and enrich existing knowledge for the use of museums, research groups or other similar public organisations.

Open science is linked to decision-making

The European Commission’s three-year Horizon2020 project CS-Track started at the beginning of 2020 in the Department of Education at the University of Jyväskylä. The project produces new information on the current state of citizen science networks and, as the work proceeds, will formulate practical recommendations and guidelines for decision-makers, businesses, organisations, citizen’s associations and educational institutions.

Raija Hämäläinen and Joni Lämsä suggest that citizen science could contribute to the pedagogy of inquiry-based learning.

Researchers are especially interested in how these organised groups operate in contemporary technological environments and how practising citizen science affects learning. The project has nine partners in Europe, and the project coordinators are located in Israel.

The project studies, for example, how data is collected, categorised or analysed in various forms of citizen science. Citizen science is a dimension of open science, which is linked to, among other areas, education and political decision-making.

“We are interested in how technology is used and how it affects learning,” says Professor Raija Hämäläinen, the project leader at the University of Jyväskylä. “The project gathers information on the effects of citizen science on individuals, organisations and society on local as well as global levels.”

Open science aims at the open availability of information. At its best, openness inspires people to participate in citizen science, says Vice Rector Henrik Kunttu in the publication Wisdom and wellbeing for us all. “As citizens participate in research, for example, by collecting data on different topics, companies and decision-makers get up-to-date information.”

Citizen science promotes interaction among and between researchers and the public and, at its best, can increase opportunities for and interest in political decision-making. Many groups associated with environmental protection are already operating this way.

As any other country, Finland has a broad range of well-organised groups that produce scientific data on varying themes, such as nature, animals, plants, aurora borealis or space, which may be targets of research in citizen science. For example, the Finnish Museum of Natural History (Luomus) and Natural Resources Institute Finland (Luke) are partners that help to manage these data. Even though these activities are in the field of natural science, citizen science also takes place in history and archaeology.

“Citizen science networks can also offer new cooperation partners for schools,” says Doctoral Student Joni Lämsä. “Participation in citizen science projects could be well-suited for the pedagogy of inquiry-based learning, for instance. Could citizen science be a solution to improve the scientific literacy of pupils and students and increase interest in natural sciences?”

Hobby leads to a career in research

Citizen science can also be a starting point for an academic career. This happened to Harri Högmander, a Senior Lecturer in Statistics. He has always been interested in nature, especially birds. Having long experience both as a member and a leader in the Central Finland Bird Club and BirdLife Finland, he has a wide perspective on the operation of citizen science organisations.

Harri Högmander watches and feeds birds in his own yard as well.

Högmander, a graduate in mathematics, realized he had reached the point where he had to consider what he was going to do for living.

“A future as a schoolteacher wasn’t attractive, and a research career in mathematics did not feel right either,” he says. The solution was in statistics, where he found he could utilise lessons from his bird-watching hobby. Högmander’s approach to statistics was top-down, as he started to write his doctoral dissertation first. In the dissertation, he developed an assessment method for the distribution of organisms, exploiting his experience in nature observations.

Högmander has noticed that practically the same principles of empirical science apply in statistics as well as bird-watching. “You must justify your observations, demonstrate their significance and assess any uncertainty,” he says. “There is competition in both science and hobbies, and neither tolerates cheaters.”

Many associations or organisations that promote citizen science, such as the bird-watching organisations familiar to Högmander, are very organised. Having been part of them for a long time, he has also seen how the activities have been boosted by technological development. “You don’t need anyone to mark observations down – you can send them digitally,” Högmander says. The situation is similar in many other organisations. 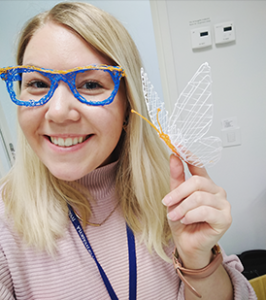 The transfer of data from hobbyists to museums and other authorities is much more fluent because of technology. “Many citizen science groups that work in the natural sciences have benefitted from technology because observations are easier to save and communication is smoother,” says Högmander. “Faster feedback in the digital world is also a great advancement, which encourages even more active participation.”

“We hope that people who are active in the field of citizen science or who are interested in the topic would contact us so that we could develop and shape the project with them,” says Project Researcher Emilia Lampi. “Obviously, you do not need to be a trained scientist. Anyone can participate in citizen science.”

The CS-Track project hopes to get contacts from citizen scientists and people participating in citizen science activities so that the project would reach those who are active in the field as extensively as possible.

Write about yourself and your project by email: cs-track@jyu.fi