One area of artificial intelligence is the identification of pictures and patterns. A computer can be “taught” different patterns and models, which it recognizes from a large amount of data. For instance, the aged version of a person’s present face generated using the FaceApp application, which recently spread in social media, was made using artificial intelligence. Picture recognition could also be used to scan, for example, magnetic resonance images and X-rays, which would give doctors more time to be with patients.

Associate Professor Neil Cronin from the Faculty of Sport and Health Sciences explores the uses of artificial intelligence in the fields of physical exercise, sports and health sciences. Cronin develops artificial intelligence applications and methods of analysis which help to automatically analyse a large amount of data efficiently. These methods are meant to work outside the laboratory as well. Using artificial intelligence, sports performances can be monitored and feedback be given immediately. 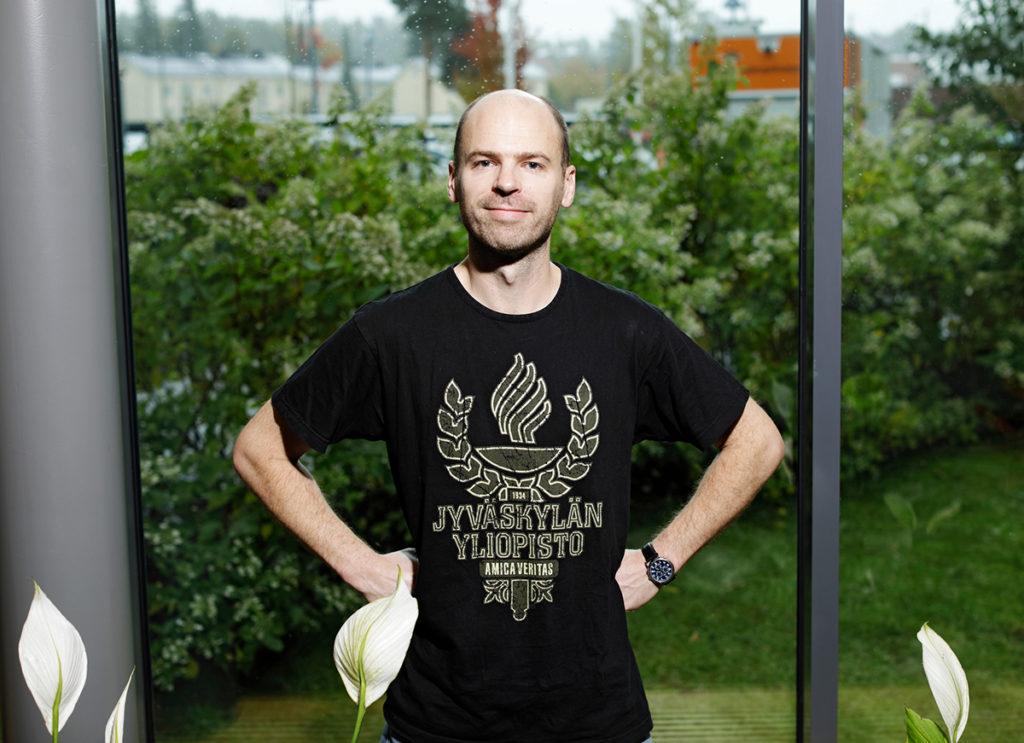 Neil Cronin has been interested in robotics and technology ever since he was a child.

Sound complicated? This video clip, shot by Cronin, which shows underwater running, should clear it up a little:

As a researcher or a coach, I might be interested in, for example, joint angles and speed. We use markers to model a running person, and calculate the joint angles. This piece of information helps us to monitor a change in the motion pattern, caused by interventions such as rehabilitation or exercise. Because we already have an idea of how a person should run biomechanically, we are able to compare this information with the way the person in the video runs.

Motion analysis has a significant role in areas such as sport. For example, it can help to determine the most efficient running style, or the angle of the javelin as it leaves the thrower’s hand. In health care and rehabilitation, we can shoot a video of a patient with brain damage learning to walk again, identify his/her trajectories and adjust them.

In world-class sports, artificial intelligence is already showing good results. For example, the world’s top football teams collect large amounts of data from every match, including the movements of the players, the ball and the opposing team. Using artificial intelligence, the data can be analysed in order to improve a team’s play.

Cronin believes that artificial intelligence will create new jobs in sports in the future:

“If we learn to analyse the data correctly, we can get the edge over competitors. The uses of the data are limitless.”

He also calls for opportunities to study the use and development of artificial intelligence: “Are we ready and open in the Faculty of Sport and Health Sciences, for example, to include these studies in the curricula, or can we cooperate with different faculties.”

Cronin himself is a fine example of a multidisciplinary researcher and student. He got a bachelor’s degree in England in sports science. He came to Finland and Jyväskylä in 2005. His master’s degree was in biomechanics and his dissertation focused on neuromechanics. After a year of being a researcher in Australia, Cronin returned to the University of Jyväskylä in 2011 as a senior researcher. His current associate professor post ends in 2021. Last year, he began master’s degree studies in the Faculty of Information Technology.

“I have always been interested in technology, computers and robots,” he says. “I had done programming for a long time but, being self-taught, I wanted to study the subject further.”

In the Cognitive Computing and Collective Intelligence master’s degree programme, Cronin completed most of the studies during the first academic year. Now, all that remains are a few courses plus the master’s thesis.

In his thesis, Cronin wants to explore further his idea of the automation of motion analysis:

“We constantly have more and more data, the analysis of which needs efficient means. Affordable, high-quality and practical means will be even more significant in the future.”

Are we keeping up with the multiliteracy skills requirements?

The future of work has arrived – and needs researching