An aluminium compound breaks benzene in a sensational reaction

In 2019, postdoctoral researcher Petra Vasko, in collaboration with researchers at the University of Oxford, managed to accomplish in a laboratory something nobody else had done before. Chemists of the universities of Jyväskylä and Oxford discovered a solution to open a chemical lock that researchers had been picking for a long time. This “lock” refers to the carbon-carbon (C-C) bond of the chemically highly stable benzene ring.

The researchers demonstrated that this molecular bond can be opened, and the intermediate products isolated by an anionic aluminium compound. The highly stable C-C bond of benzene reacts with the aluminyl, even at room temperature. As a result, one of the carbon bonds of benzene was broken and aluminium inserted in the benzene ring, forming a seven-membered heterocycle.

Benzene is a compound found in crude oil, for instance, and it is used as raw material in petrochemistry. It is also highly toxic, but owing to its stable chemical structure, it also offers a splendid touchstone for researchers. Indeed, the introduction of this reaction was an important milestone, since transforming the chemically highly stable benzene into more complex compounds can revolutionise industrial processes.

”For example, some reaction steps can be left out in industrial processes, if benzene can be opened this way,” Vasko says. “It would simplify the syntheses and could even create novel routes for more complex and useful compounds. The ultimate goal is that the reaction could be made catalytic.”

The research team’s discovery was published in the Journal of the American Chemical Society in 2019, and an annual summary noted the reaction as a “sensational” one in the field of chemistry.

“The attention the results and research received was surprising: the U.S.-based Chemical and Engineering News wanted to interview us after the publication had come out, on Twitter our colleagues have been widely amazed, and at the end of 2019 C&EN even chose our publication as one of the highlights of the year,” Vasko says.

Aiming at a novel catalyst

In this research, the chemical experiments were conducted at the University of Oxford and the computational chemistry analyses to reveal the possible reaction mechanism were conducted at the University of Jyväskylä. Vasko modelled the reaction mechanism by computational means and postdoctoral researcher Jamie Hicks carried out the experimental work. Professors Simon Aldridge and Jose Goicoechea were in charge of managing the project.

The study started already in 2017 and Vasko joined when initial experimentally interesting results had been observed.

Luckily enough, Petra Vasko was on a researcher exchange in Oxford when the revolutionary reaction was confirmed in the laboratory.

“It was a great feeling when Jamie asked me to come along and look at the crystal structure of the product,” Vasko says.

“We hope that our research would lead to the creation of a novel catalyst consisting of main group metals only,” Vasko says. 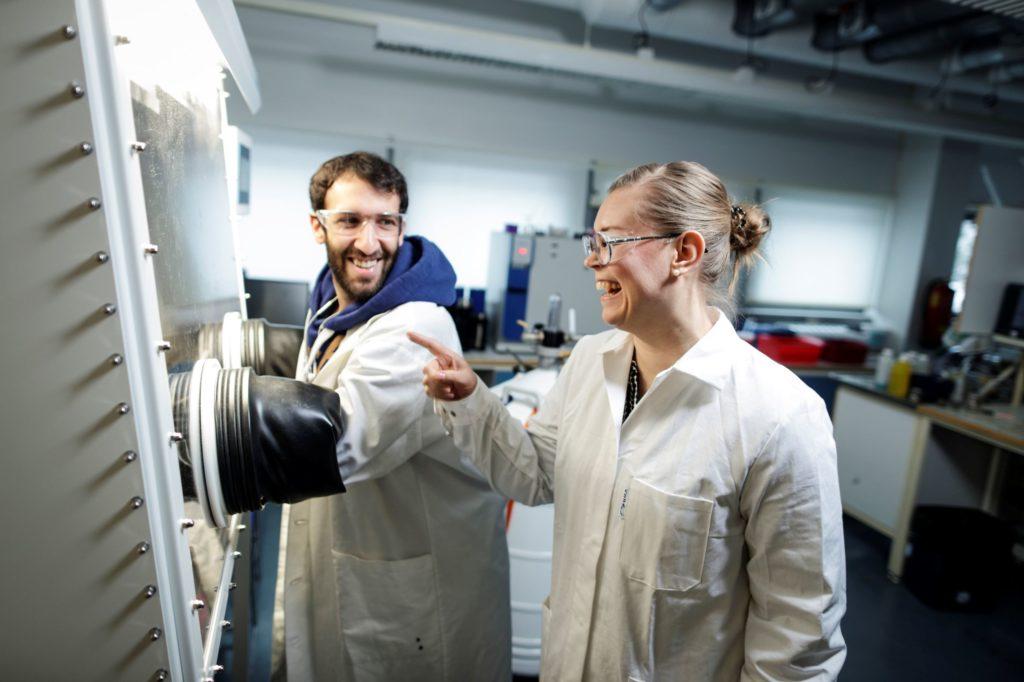 Petra Vasko is working now at the Department of Chemistry at the University of Jyväskylä, here with colleague Chris Gendy.

Vasko’s doctoral thesis on the chemistry of main group systems was approved at the University of Jyväskylä in 2015. She was a member of Professor Heikki Tuononen’s research team. From 2017 to 2019, she worked as a postdoctoral researcher in Oxford with grants from the Magnus Ehrnrooth Foundation and the Finnish Cultural Foundation. Vasko has received the Academy of Finland Postdoctoral Fellowship for the years 2018 to 2021.