Bacteriophages – bacteria-destroying viruses – were discovered almost a century ago. Now they are used for developing tools against bacteria that have become resistant to antibiotics. The research group of Associate Professor Lotta-Riina Sundberg focuses on bacteriophages, which can kill the flavobacteria that cause skin and gill infections in fish.

In nature, bacteria and even a more numerous group of bacteriophages are in a continuous battle. Each bacterium has a bacteriophage that can destroy the bacterium.  Bacteria block intruding phages by, for example, producing proteins that break down virus genome. In turn, phages try to mislead bacteria in many different ways so that they would be able to reproduce in the host bacteria. 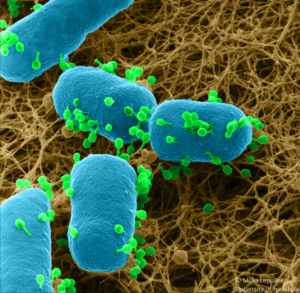 The bacteriophages (green) on flavobacteria are captured by the helium ion microscope at Nanoscience Center. Credit: University of Jyväskylä/Miika Leppänen

This battle can leave a trace in the bacterium’s genome: DNA-sequences from the virus’s genome are copied to a system called CRISPR. Lotta-Riina Sundberg’s research group trace these sequences because they may help to find the right kind of bacteriophage that is able to defeat the flavobacterium (Flavobacterium columnare) that infect edible fish such as rainbow trout.
“Now we know the types of phages the bacterium has been exposed to earlier and can search for mutant phages that are able to destroy the bacterium,” says Sundberg.

A milestone occurred when Sundberg accidently succeeded to isolate the first bacteriophage that infects flavobacteria in the laboratory of the Nanoscience Center at the University of Jyväskylä in 2007.   After that, the group has gathered a significant amount of follow-up data: samples of the battle of the bacterium and the bacteriophage have been collected from Finnish fish farms from 2007.
“It has required patience to collect data and demonstrate the competition between bacteriophages and bacteria in nature,” says Sundberg, describing the benefits of long-term data.

Bacteriophages can be taken to fish in the skin mucus

Flavobacteria cause fish skin and gill infections worldwide especially during warm-water periods. At fish farms, epidemics spread rapidly and cause significant losses in production every year. There is still a long way to the extensive industrial use of bacteriophage treatments, but the researcher group at the University of Jyväskylä is already testing methods for introducing bacteriophages to fish to prevent the bacterial disease.
Now it is being studied if the phage should be passed to fish through the feed or the fish skin mucus. 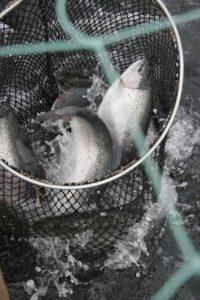 The phages could be inoculated onto the skin mucus of fish before the bacterial infection occurs. Credit: Luonnonvarakeskus

“Promising results have been achieved when fish have been colonised with bacteriophages before the bacterial infection occurs. The phages are inoculated onto the skin mucus of fish. They attach to the mucus and may persist for several days in the fish mucosal surface. We are studying how long these phages can protect against the disease,” Sundberg explains.

There are also other options: bacteriophages could be put into fish feed or attached to the surfaces of fish farming tanks, in which case they would act similarly to probiotics. According to Sundberg, a company in Norway is already making bacteriophage treatments for fish.
“I also know that phages are used in the United States to control Listeria in foodstuff packages and in England to prevent potato diseases.”

CRISPR has made genome editing easier

Lotta-Riina Sundberg studies the mechanism whose utilisation has rapidly become more common in molecular biology. CRISPR is an abbreviation of Clustered Regularly–Interspaced Short Palindromic Repeats: the DNA-sequences that originate from previous infections are clustered at regular intervals in the DNA of the bacteria.

“For a bacterium, this immunological memory is like a program that can be updated.  When a new unknown virus infects the bacterium, a short piece of the virus’s genome is integrated into bacterium’s CRISPR memory. If the same gene sequence will enter the cell again during a phage infection, the bacterium identifies the sequence and destroys it. This way it can avoid the infection,” says Sundberg.

CRISPR has also resulted in genetic engineering techniques, so-called “gene scissors” for genome editing. Genomic DNA strands are cut so that the organism will have the desired characteristics. With the help of the method, the engineering of genomes has become possible for a larger group of researchers. Based on Sundberg’s personal observations, the number of research publications has increased quickly, even exponentially, in the last couple of years.

Sundberg’s group does not use the gene scissors but aims to clarify how CRISPR operates naturally in bacteria. According to Sundberg, gene engineering technologies should be examined and developed extensively now when legislation for genome editing is being revised:

“To be able to use different techniques safely and appropriately, we must know what is possible and what risks they include.”

A patent application is pending for bacteriophage production methods 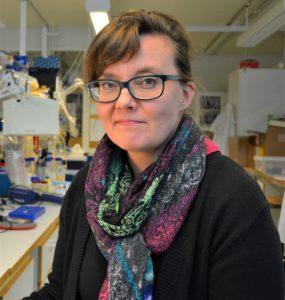 Lotta-Riina Sundberg and her research group work at Nanoscience Center and at The Department of Biological and Environmental Sciences.

Sundberg started her research career by studying aquatic sciences in the Department of Biological and Environmental Science at the University of Jyväskylä in 1997. Cell and molecular biology quickly captivated the fish biologist. She was fascinated by how visible things could be made in the laboratory even in one night.

“First you see nothing in the bacterial culture, but the next morning it is full of life.”

Sundberg wrote her doctoral dissertation about flavobacteria in 2005. Currently, she is leading a research group of eight members at the University of Jyväskylä, including three postdoctoral researchers, three doctoral students and two project researchers.

Sundberg received four-year funding from the Academy of Finland in 2018. The research is also funded by the Jane and Aatos Erkko Foundation, the Joint Baltic Sea Research Programme (BONUS) and the European Maritime and Fisheries Fund (EMFF). A patent is pending related to the production methods of bacteriophages.

The latest research in biosciences, chemistry and physics is on display at Nanoscience Days, an international nanoscience conference organised by the Nanoscience Center of the University of Jyväskylä on 8–9 October 2019 in Jyväskylä. Link to programme: jyu.fi/nsdays

Industrial scale in sight: valuable metals can be profitably recovered from e-waste