The early days of the Jyväskylä University Library, built in 1974, include a change of the architect, a dispute about the location and a visit by Queen Elizabeth II. The Yellow Library exhibition presents the library’s colourful history.

At the beginning of 1970s the Finnish welfare state was under construction and the number of university students was increasing steadily. The library wing of the Main Building, designed by Alvar Aalto, had become crowded. A larger library was needed.

At first, the job of designing the new library building was handed to Aalto. Aalto, however, eventually pulled out of the project. Why he did so is still not known for sure. One explanation is that new trends in architecture and the town plan put too many restrictions on Aalto’s design process.

“At the time, significant changes had been made in the state’s practices for contracting construction. With earlier university buildings, Aalto had a free hand. Construction was regulated much more strictly and values such as economic efficiency were now part of the process,” says Riikka Mäkipelkola, one of the authors of the exhibition.

Arto Sipinen, who had recently won an architecture competition for the Mattilannemi and Ylistö campuses, was chosen to fix the situation. The library became the first of several buildings Sipinen designed for the University of Jyväskylä. 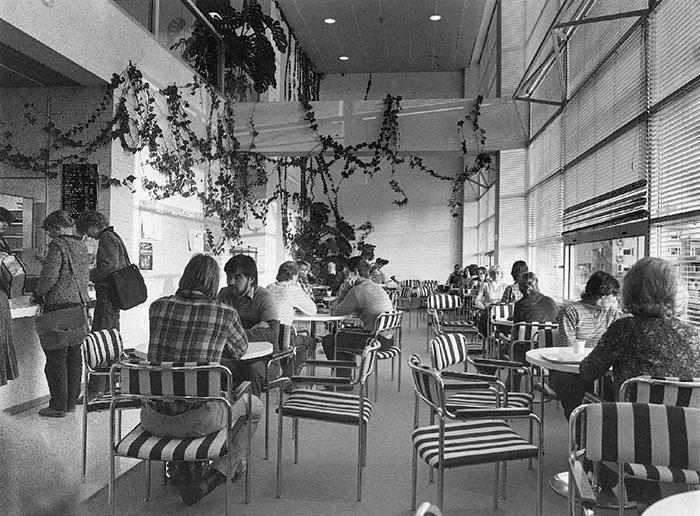 Prior to the 1970s, books were held in closed stacks and users had to request them from the librarians and keep them in the reading rooms. Chief Librarian Eeva-Maija Tammekann wanted to change the situation.

“Tammekann wanted all of the books in the closed stacks to be located in the reading rooms so that people could access the stacks and browse for books on their own,” says Riikka Javanainen, the other author of the exhibition.

The idea met with significant resistance, but Tammekann ultimately got her way and, for the first time, all the knowledge was freely available in the library’s reading rooms. Upon its completion, the library was the largest scientific library in the Nordic countries when measured by the number of reading room seats.

“The library building is a concrete realisation of society’s aims at the time: openness, equality and the expansion of education. We wanted to people to see the building now when it still is in its original form,” Javanainen says.

When it was opened, the library was recognised all over Finland as well as in international architecture and library circles. It received many visitors, the most famous being Queen Elizabeth II of the United Kingdom. In this video Eeva-Maija Tammekann talks about Queen Elizabeth’s visit.

Now a new change is ahead of us: the library will be renovated starting in spring 2019. We also want to document the library’s recent history. Please share your memories of the library here. During the renovation, the library will operate in temporary facilities.