“Today the School is perhaps the most popular international student training event in Finland, probably also in Scandinavia”, says Professor emeritus Jouko Korppi-Tommola. He is one of the founders and former chairman and course organizer of the Jyväskylä Summer School. This is his speech in School opening 9th Aug 2021.

“In 1991 the rector at the time, Martti Takala, invited a small group of professors, Vesa Ruuskanen (theoretical physics), Matti Manninen (material physics, later the rector of the University), Pekka Neittaanmäki (applied mathematics and information technology) and myself (physical chemistry) to ponder how to increase the visibility of the University in the coming years.

Soon the original idea of the Jyväskylä Summer School (JSS) focusing on training of Masters and PhD students in natural sciences, i.e. chemistry, mathematics and physics to allow interdisciplinary study of courses during the school days was born. Suitable time slot for the School was chosen to be August, the European holiday month. Few years later biology, information technology, scientific computing and statistics courses were added to the course program.

From the beginning it was considered of importance that credits from the courses were to be given to students, who passed the course exam or solved an agreed number of practical problems or attended practical lab courses or computer exercises. Enjoyable student summer holiday in Finland was not considered an option. We now know that the certificates given to the students have been widely accepted as credits in their home institutions.

It was decided that the School should be free of charge and should run annually as long as it attracts students, and it has, this year for the 30th time.

At early stages we had a substantial flow of students from recently collapsed Soviet Union and Ukraine. We were able to raise money to support their travel in Finland and their accommodation while here, since for them getting foreign currency or funding at all to travel abroad at the time was impossible.

Today the School is perhaps the most popular international student training event in Finland, probably also in Scandinavia. The School is well known in Europe and Russia and is gaining reputation also in Near East, Africa, Asia and China. The School has become a ‘product’. During my conference trips if have met several professors that have come to me and said, “Jouko, do you remember me, I attended the JSS in this and this year?”. Of course I remembered!

Matti Manninen standing here told me that from his first material physics course quite a few students became professors later on. How many present day professors word wide at early stages of their careers have attended the JSS, we do not know exactly, but my estimate is hundreds.

Students of the School have been able to enjoy supervision from native English-speaking teachers. 41 percent of the foreign teachers, of in total nearly 600 so far, have come from the United States or from the United Kingdom.

Next largest groups of teachers have come from Germany, Sweden, France, the Netherlands, Italy, Russia, Switzerland, Austria, and Denmark, from the best science countries in Europe.

Majority of teachers of the School have been well known scientists, in many cases leading scientists or pioneers of their fields of expertise.

Annually some 300 students have come here to take these courses.

Lecturers have been given advance instructions to adapt their words to their multidisciplinary audiences. During the courses a biologist has had the opportunity to meet a statistician, a chemist a physicist, a mathematician an IT person, a theoretician an experimentalist etc….

The School is and has been an excellent forum in improving your skills not only in your own field but also nearby fields to widen your multidisciplinary thinking.

I remember a chemistry course I organized in 2008 which focused on a special theme of four wave mixing in nonlinear optical materials, an important theme for my own students. Not a traditional chemistry course. The lecturer was the famed pioneer in the field Professor Shaul Mukamel from University of California, Irwine. I was really nervous, do we have a foreign participation at all.

Finally 54 students attended the course and the response on teaching given was excellent, in spite of the difficult theoretical topic including famous Feynman diagrams.

Another high-light in my memory was the millennium seminar in 2000 at the city theater where  invited plenary speakers were asked to survey advancements of their fields in the last century, in mathematics, physics, statistics, chemistry and biology. The grand pioneer and developer of theory of molecular interactions professor David Buckingham from Cambridge University gave a memorable chemistry talk. I think many other course organizers over the years have experienced many similar success stories.

The truth is that if you have Bruce Springsteen to give a rock concert people come and listen. Over the years the course organizers, using their scientific contacts, have been able to invite a continuous flow of Bruce’s to our Summer School and guaranteed that the rock of the School continues. Today we also can enjoy a rock concert by a single man who gave a concert also in  the first School, my friend and pole vaulting mate early 80’s, another Jouko present here.

Organizers of the School 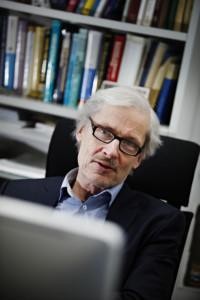 It has been great that each year a local professor or senior researcher of our University has been able to take the responsibility to organize the school. This has meant getting funding for the school (c.a. 100 -150 k€/year), forming and chairing the organizing committee, planning the School program, advertising it internationally, getting the School started, organizing hosting the lecturers, being in person at the common School events and then reporting of the outcomes to the funders.

At practical level the School secretary over the years has been the motor that has kept the Schools running.

I recall that during the first School together with Marja standing here we carried blankets and cutlery to the empty student apartments that were reserved for student accommodation. I take the opportunity thank all the chairmen, course organizers and the secretaries of the School for their invaluable contributions in keeping up the School alive and timely.

Support for the School

Without continuous support from our own University, Academy of Finland, Ministry of Education, City of Jyväskylä, EU and several private foundations the School was not here. On behalf of the School we greatly appreciate the financial support received so far and believe that it continues, a necessary asset to carry on rector Martti Takala’s idea of promoting the visibility of our University and also Finnish academia.

It happens in the minds of students that have attended the School and who share their good experiences in their home institutions. No Nature advertisement would be nearly that efficient.

Over the years the student experiences from the School has been overwhelmingly very good even enthusiastic. The social programs of the school focusing on Finnish culture, traditions and pure nature have offered pleasant intermissions during the demanding course work.

Cultures of this planet have met and mingled at the School every year, parties at rooftops of student campuses have taken pace as well as hundreds of sauna parties with whatever outcomes…

I sincerely hope that students would again meet face to face next year after the stressing COVID ordeal.

It has been a privilege to be one of the founders and former chairman and course organizer of the School. Together with my colleques Matti Manninen and Pekka Neittaanmäki here we have been happy to see how the School has prospered from year to year and wish it to continue and prosper for years to come.

And finally, I want to warmly welcome all the teachers and the students to the 30th Jyväskylä Summer School. Enjoy your School time both teaching and learning.”

The 30th Jyväskylä Summer School is organized online 9 – 20 August 2021 at the University of Jyväskylä. The Summer School is targeted at advanced Master’s students, graduate students, and post-docs in the fields of Science, Technology, Engineering and Mathematics (STEM).