Hints for bird observers in winter: Are there any endangered willow tits at the feeding place?

Across the country, fewer than ever willow tits were noted in the annual Yard Observation. Similarly, also the observations of crested tits were infrequent like last year as well.

The rarity of observations tells about the difficult situation of these forests dwelling tits. Both species were among the most frequent ones in our forests still a couple of decades ago, but since then their numbers have plummeted rapidly to a worrying degree, and therefore these tits have been added to the list of endangered species in the latest national report.

Which species were most frequent in Central Finland?

The Yard Observation Event involved about 1400 yards from Central Finland and about 16,000 yards across the country. The event took place in the last weekend of January, now for the sixteenth time already.
The most frequent species recorded in Central Finland included (at the time of writing this, the observations are still being updated):

Due to the rather snowy winter, many bird species, such as the yellowhammer, have gathered into flocks larger than usual (421 observations/ 8563 individuals). In Central Finland, willow tits were observed at quite a few feeding places (435 observations/ 1026 individuals), but the crested tit was still rather rare (160 observations/ 300 individuals). Even usual species, despite their presently large numbers, may become endangered along with a long enough decreasing trend.

The purpose of the Yard Observation Event is to encourage people to observe our winter birds and join the crowd-sourced data collection, where bird observations made at one’s own feeding place are gathered to a national database.

What is topical at feeding places, and what would be good to observe? 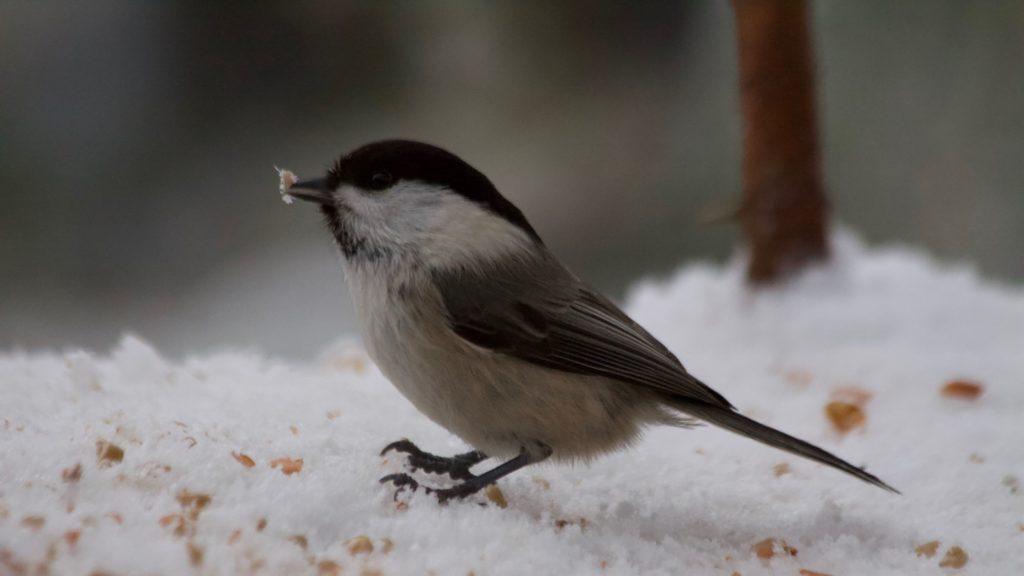 Nokelainen encourages people to observe in the frosty February whether any willow tits appear at feeding places and to report the observations to the Tiira register of BirdLife Finland.

Birds gather to feeding places for food, of course, but a flock usually offers also some protection from predators. A feeding place may attract, for example, a Eurasian pygmy owl, a sparrowhawk or a great grey shrike to the site.

At feeding places, one can see the clearly different feeding habits typical of each species. Tits like to fetch a sunflower seed, for instance, and fly to peck it at a distance under the cover of tree branches until returning for a new seed. Yellowhammers tend to appear in large flocks and like to feed on oats, pecking it on the ground. Woodpeckers are fond of bird suet and suet may attract a funny flock of long-tailed tits for a visit as well.

After establishing a feeding place, one should take care that there is food available throughout the winter, feeding should not be stopped too early, because many birds are dependent on it. One should also look after the tidiness of the feeding place.

The writer works as a researcher at the Department of Biological and Environmental Science, University of Jyväskylä. He is also the Chair of the Ornithological Association Central Finland. Contacts:

Further information (in Finnish) about birds, feeding, and reporting of observations: