At the University of Jyväskylä, researchers examine butterflies and moths in terms of animal communication. Every summer in the moth farm, thousands of moths are produced under laboratory conditions in the predator-prey interactions research group led by academy professor Johanna Mappes, but this summer the researchers captured an exceptional individual. It is a gynandromorph featuring both female and male genotypes.

The exceptional moth appeared in a laboratory where the moth species Arctia plantaginis is grown for research purposes related to signalling as a part of animal communication. By means of these moths, researchers investigate what kinds of messages individuals send to their predators and conspecifics by their colouring.

In laboratory conditions, the life cycle of the butterfly is speeded, resulting in even two new generations – i.e. tens of thousands of individuals – per summer. Amidst the crowd of fluttering wings, the gynandromorph came across for the first time. 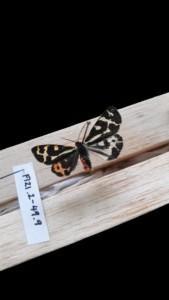 The butterfly was photographed in the lab. Photo: Ossi Nokelainen

“This particular individual seems to consist of two halves as if it was a clear-cut of male and female put together. The phenomenon is probably result from a developmental disorder taken place during mitosis, an initial stage of cell division”, explains Postdoctoral Researcher Ossi Nokelainen from the Department of Biological and Environmental Science”, University of Jyväskylä.

“Gynandromorphic insects occur sometimes in nature, but typically too rarely in order that they could be collected in sufficient numbers for behavioural studies, for instance”, Nokelainen says.

In the Department of Biological and Environmental Science, researchers took DNA samples from both sides of this gynandromorphic moth, after which its wings were spread for display purposes. Then it was photographed not only in the human visible studio light in the lab, but also for ultraviolet and infrared spectra.

“Although this kind of special individuals are highly interesting, they often remain just curiosities due to their rareness”, says Nokelainen.